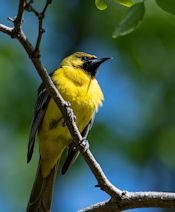 Many people have enjoyed warblers migrating through Dyke Marsh this spring, 2020. Many species have bright colors. Some migrate from South America to northern Canada.

Barred owls are known for their haunting, baritone night call, “who cooks for you, who cooks for you-all.”  They get their name from their “bars” or striped plumage. Generally, they roost during the day and hunt at night. Adults are around 21 inches in length and a little over a pound in weight. They tend to be in older forests, but are highly adaptable to varied habitats, including mixed forests and disturbed areas. “Barred owls are the opportunists of the owl world,” wrote Leigh Clavez in The Hidden Lives of Owls.

A Bald Eagle Attacked an Osprey

An osprey (Pandion haliaetus) was a victim of a bald eagle (Haliaeetus leucocephalus) attack on Sunday afternoon, March 22, 2020.  The bald eagle may have attacked the osprey trying to defend his or her territory or because of what is called kleptoparisitism when one species steals food from another.  The osprey came to the ground after the attack and was stuck in some bushes.  FODMers Rich Rieger and Sherman Suter extracted the bird and Rich wrapped it up in his coat.  Despite some bleeding, the osprey settled down and Rich placed the bird on a picnic table.  After a moment, the osprey took flight, seemed normal to the human eye and landed in the top of a tree.

This goose is white with black wingtips and considered the smallest of the "light" or snow geese. Ross's goose has a short neck, rounded head and a stubby bill with no "grin patch" seen in its larger cousins due to their curved tomium, the cutting edge of the bill, Ed explained. More mature birds, particularly males, have warty gray tubercles at the base of their bills, said Ed.

Dyke Marsh in the News

Wildlife in a Changing Climate

On November 13, 2019, at FODM’s quarterly meeting, Dr. Sally Valdes outlined several ways that climate change is adversely affecting wildlife.  Introducing the topic, she said that carbon dioxide and other greenhouse gas emissions have risen to levels unprecedented in the last 800,000 years.  Carbon dioxide concentrations have been tracked continuously at the Mauna Loa Observatory in Hawaii since 1958 and the trend has been steadily upward, from about 315 parts per million (ppm) to 414 ppm in the spring of 2019. 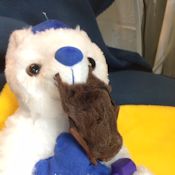 FODM Board of Directors’ member Deborah Klein Hammer saves bats and is featured in a September 16, 2019, article in “DCist” here.

Deborah studies Brazilian freetail (Tadarida brasiliensis) and Seminole bats (Lasiurus seminolus) in Dyke Marsh.  Around 2013, a Brazilian free-tailed bat came into care of the Save Lucy Campaign (www.savelucythebat.org/), an organization devoted to rehabilitating injured and orphaned bats and educating the public about the importance of bats.