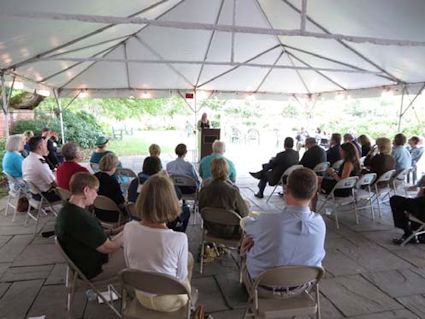 On October 2, 2016, 125 friends and supporters of the Dyke Marsh Wildlife Preserve (photo by Ned Stone) celebrated the 40th anniversary of the Friends of Dyke Marsh, the 100th anniversary of the U.S. National Park Service and the start of marsh restoration. FODM thanks the many generous members, friends, volunteers, sponsors and donors who made the celebration possible. See the lists below. 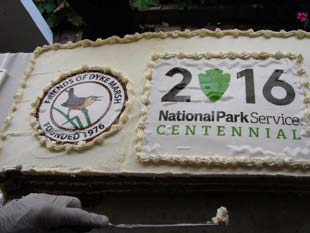 President Glenda Booth recounted the longstanding Congressional support for the marsh’s restoration, telling the group that the 1959 legislation that added the Dyke Marsh Wildlife Preserve to the national park system, P.L. 86-41, clearly stated Congress’s purpose for the preserve:  “so that fish and wildlife development and their preservation as wetland wildlife habitat shall be paramount.”

She shared a message from former Michigan Congressman John Dingell, who was instrumental in the passage of the 1959 bill:  “Congratulations to the Friends of Dyke Marsh on your 40th anniversary.  I am sorry that I could not be with you today to celebrate this important milestone.  Forty years ago, we came together to set aside this land for future generations to enjoy and our dream has been realized thanks to your hard work.  Your dedication to conservation and preservation is admirable and worthy of our praise.   Best of luck in the future and please keep up the good work.”

She also recognized Chris Risley from Toronto, Canada, son of an FODM founder Ed Risley and Cynthia.  Glenda quoted one of Ed’s friends who said, “His gentle but persuasive enthusiasm was contagious.” 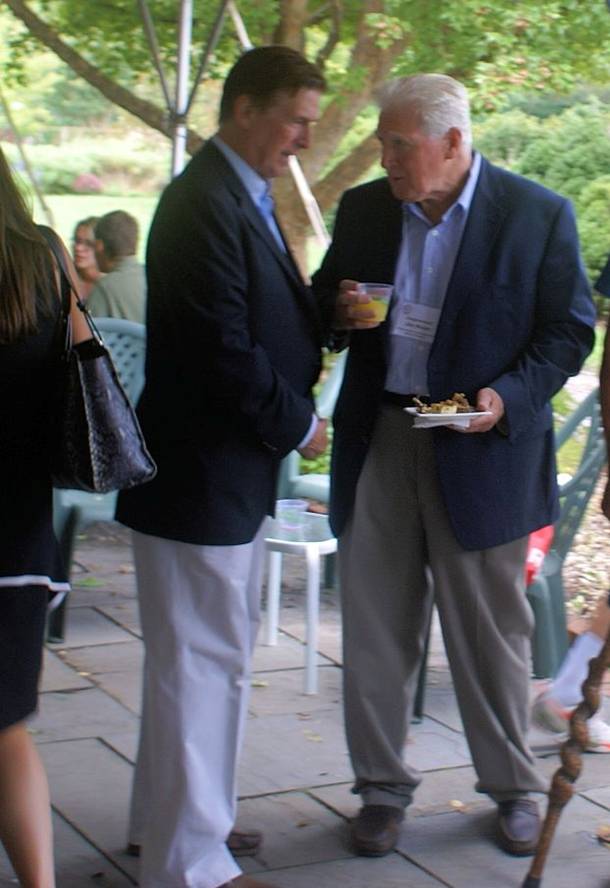 Congressman Don Beyer with former Congressman Jim Moran. Photo by T.D. Hobart                 Virginia’s current eighth district Congressman, Don Beyer, said that biologist E.O. Wilson proposes that half the planet be set aside for biodiversity. “E.O. Wilson would be pleased. This restoration of Dyke Marsh is a great start.”  He also referred to entrepreneur Elon Musk, who proposes to colonize Mars in 2020, in part because of how much damage humans are doing to this planet.  Congressman Beyer urged, “We need to save this planet instead!”

Congressman Beyer introduced former Virginia eighth district Congressman Jim Moran and credited the former congressman for the $24.9 million grant in 2013 from the U.S. Department of Interior for the marsh’s restoration.   Congressman Moran told the group, “Dyke Marsh would not have been preserved if the people of the community hadn’t acted and brought the problem to the attention of Congressman Dingell and others.  It would have been gone long ago if the dredging had continued.  Dyke Marsh is unique and preserving it makes this a better community now and for generations to come.” 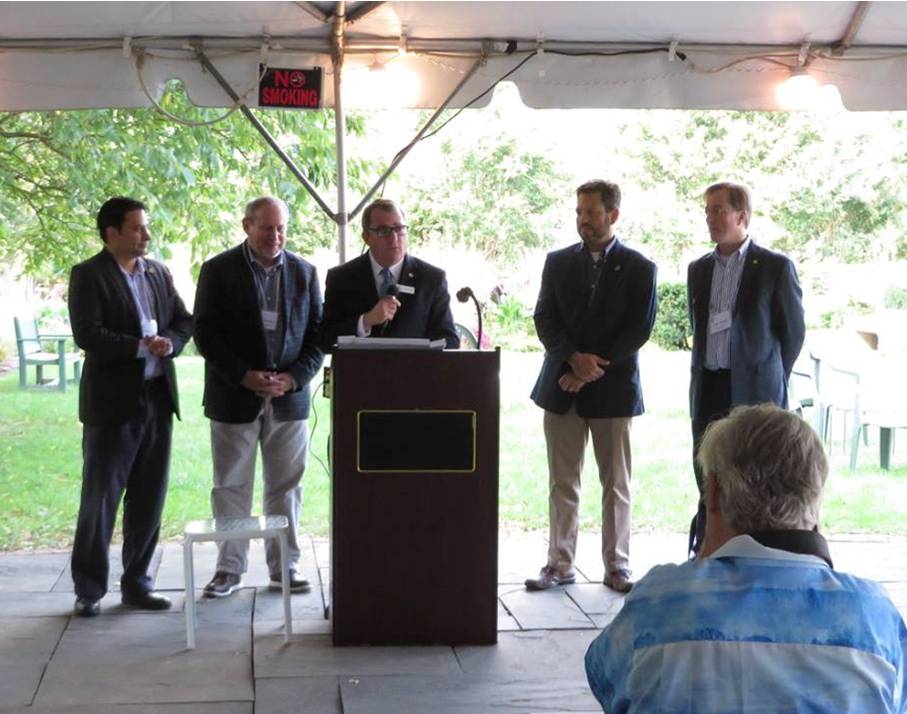 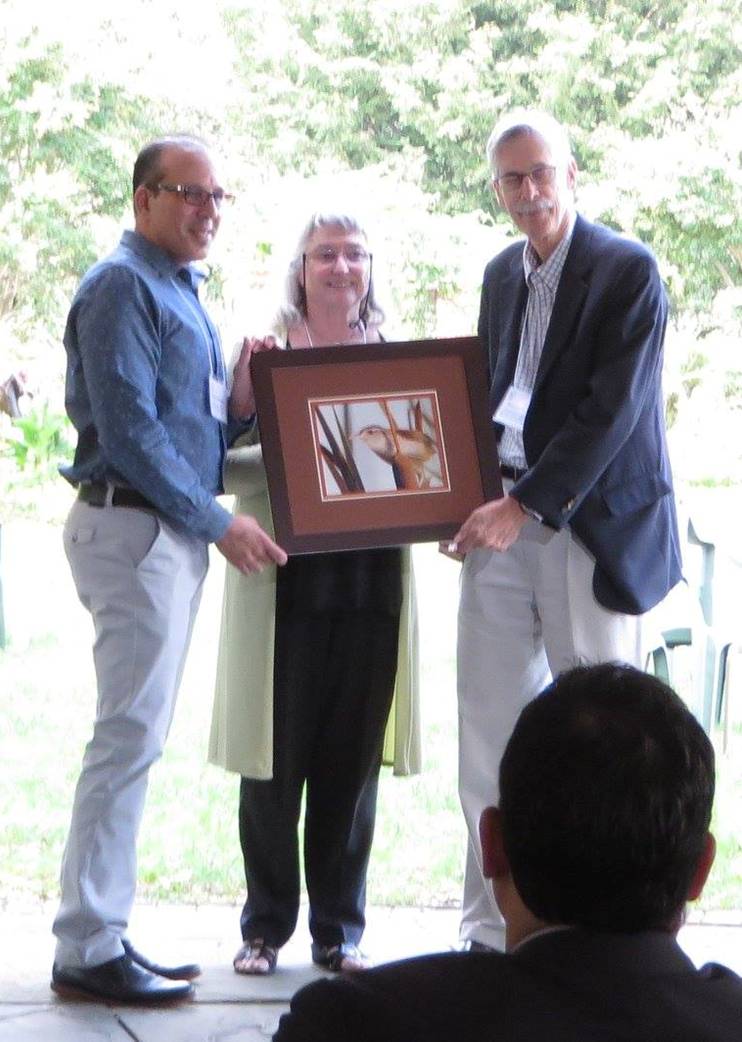 Glenda Booth presented a photo of a marsh wren to Alexcy Romero and Michael Bean. Photo by Ned Stone                Glenda presented to Alex Romero, George Washington Memorial Parkway Superintendent, and Michael Bean, Deputy Assistant Secretary, U.S. Department of Interior, a photograph of a marsh wren, and reported that FODM surveyors did not observe any marsh wrens in the breeding bird surveys in 2015 and 2016, for the first time ever.  She expressed hope that restoration could create and expand habitat for this bird and other wildlife.  Superintendent Romero commended “all the passion for this amazing resource” and congratulated FODM for 40 years of “successful stewardship, advocacy and education.”  He cited three major 2016 NPS milestones for Dyke Marsh restoration:  completing the environmental impact statement in June; signing an agreement on restoration design with the U.S. Army Corps of Engineers in July; and a September 29 “Rapid Review Team” presentation, precursor to the “Design Advisory Board,” required for projects costing over $1 million. 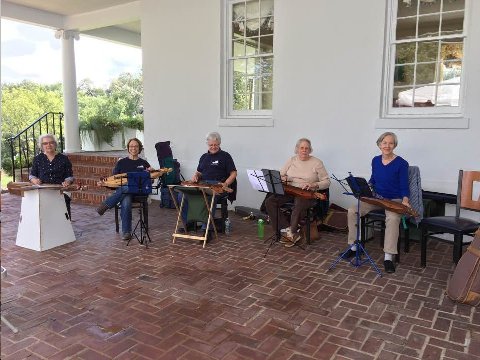 The Northern Virginia Dulcimer Players provided music. Photo by Patricia A. McCarthy               Glenda closed by noting that NPS preserves the most beautiful, treasured and historic places, in the words of National Park Service (NPS) Director John Jarvis, “our American cathedrals.”  She added, “In some ways, Dyke Marsh is hidden. Thousands drive through it and do not realize they are in a national park, that the marsh is there or recognize its value and fragility.  It’s not Yellowstone, it’s not the Grand Canyon, but it is our little slice of wilderness right here in suburbia.  When restored, it could be our Everglades.” 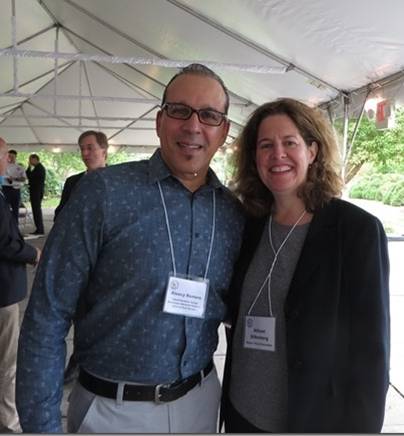 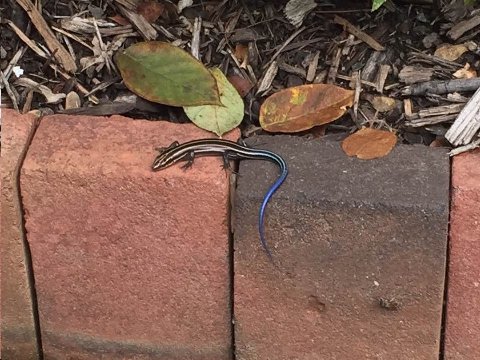