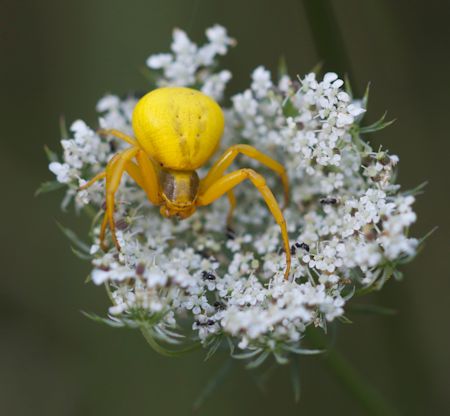 The BioBlitz was a nationwide celebration of NPS’s centennial, sponsored by NPS and the National Geographic Society.

Dana Deroche, a Smithsonian Institution spider expert, identified the spiders for volunteer collectors.  We were honored to have Marco Aurelio, a park ranger from Chile, and many volunteers.  Alex Romero, Brent Steury and other NPSers organized the activities and provided able assistance.

Why spiders?  Norman Platnick of the American Museum of Natural History was quoted in the Washington Post (July 22, 2014) saying that worldwide 45,000 spider species have been identified and “that’s at best one-half of what actually exists.”

All photos contributed by Ed Eder. Above, the goldenrod crab spider (Misumena vatia)  on Queen Anne's lace (On goldenrod this spider camouflages beautifully}.