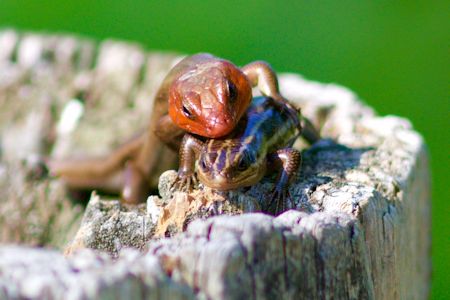 Spring is breeding time in Dyke Marsh for many species of wildlife, including skinks. The American five-lined skink, (Plestiodon fasciatus), is one of the most commonly seen lizards in eastern North America and is frequently observed around logs along the Haul Road Trail (photo, skinks mating May 2016 by Ed Eder).

May and June are the prime breeding months for this skink species.  Adult males often have bright orange heads or jaws only during this period.   As the male ages, he may lose the five stripes and assume an olive-brown color, but the female always retains her lined pattern. Juvenile five-lined skinks have neon blue tails.

Five-lined skink females provide significant parental care of their eggs, laying them in cavitated logs.  Observers have seen females their body coil position around the eggs to regulate moisture and temperature and females defend the eggs against small predators.  They rarely leave their eggs unattended and will retrieve those which are displaced.  They incubate eggs from over three to seven weeks.

A male Plestiodon fasciatus can aggressively challenge competing males while in its breeding phase.  Males have been observed biting other males and tossing them in the air.

On May 27, an FODMer observed a male skink mating with a female near the bridge on the Haul Road.  He initially bit the back of the female and then attempted to mount, but was interrupted by an interloping male.