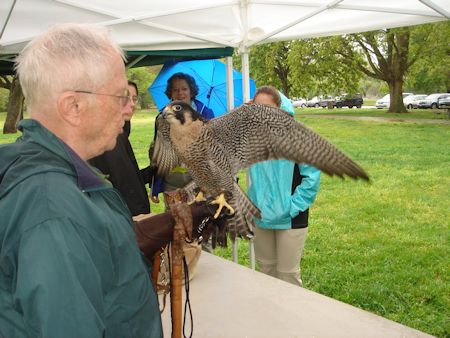 Under a steady drizzle, a steady stream of raptor fans attended the annual Raptor Rapture in Belle Haven Park on April 23, 2016, sponsored by FODM, the Raptor Conservancy of Virginia and the National Park Service.

Kent Knowles (pictured) and Gabby Hrycyshyn of the Conservancy brought an Eastern screech owl (gray morph), an American kestrel, peregrine falcon (photo), red-tailed hawk, barn owl and Harris’s hawk.  These birds cannot live on their own in the wild.

The red-tailed hawk suffers from lung damage and cannot fly.  The Eastern screech owl lost one eye in an accident.  The peregrine falcon and Harris’s hawk were raised in captivity and have imprinted on humans.

Many thanks to the Raptor Conservancy for their great work and to the National Park Service, George Washington Memorial Parkway, staff for their support.