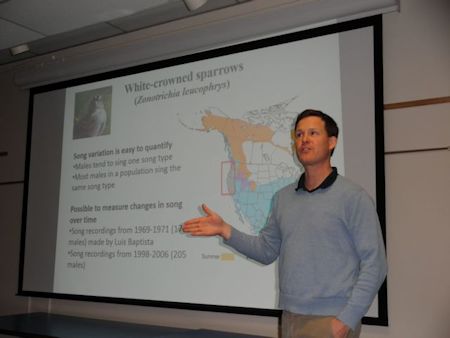 On February 28, 2016, Dr. David Luther, George Mason University biology professor, gave a presentation to FODMers and friends on his research analyzing the effects of noise on birds’ communication, a field called “acoustic ecology.”  Generally, birds sing to attract mates, to defend territories and to establish “social status,” he told the 75 attendees.  In urban areas, anthropogenic noise, like the noise from traffic or gardening tools, can cause birds to change their behavior and their songs.

Here are a few highlights from his talk describing the impact of noise on birds:

·       --  Some birds change the way they sing in response to traffic noise by singing at a higher pitch, louder or at different times of day than in quieter locations.

·     --   Male birds give stronger responses to songs that are not adjusted in the presence of human made noises, thus vocal quality seems compromised for those who adjust their songs.

·      --  Singing activity can be greater in the city compared with less urban areas.

·      --  Some birds change their vocal dialect to be more audible above human-made noise.

·        -- Urban birds may sing earlier in the morning and more often than rural birds.

Dr. Luther’s work is described in this article titled “The Language of Sparrows” at https://baynature.org/articles/the-language-of-sparrows/.