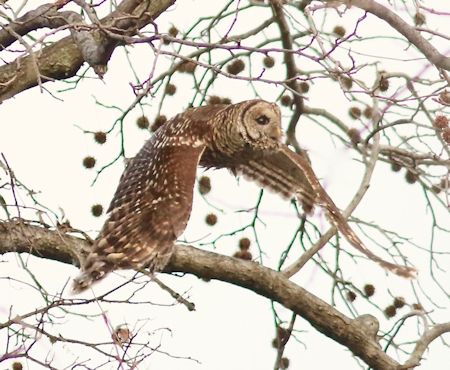 Spring is underway in Dyke Marsh, especially in the “bird world.”  Former FODM President Ed Eder has taken these beautiful photographs and made a video of some recent bird sightings in Dyke Marsh.

Two barred owls (Strix varia) have been seen near the Haul Road.  Here is one flying through a sweet gum tree.

Common mergansers (Mergus merganser) are engaging in courtship, before heading north.  Males flick their heads, raise up their tail feathers to bare a white, under-tail covert which appears golden in sunlight and they initiate wake-producing dashes in the water to attract females.  The female also participates with head movements, lunges and vocalizations.

Raccoons are using a tree cavity close to the Haul Road entrance.  On March 2, 2016, when Ed Eder heard a raccoon grunting, he looked toward a tree and a smaller raccoon poked its head out of a cavity.