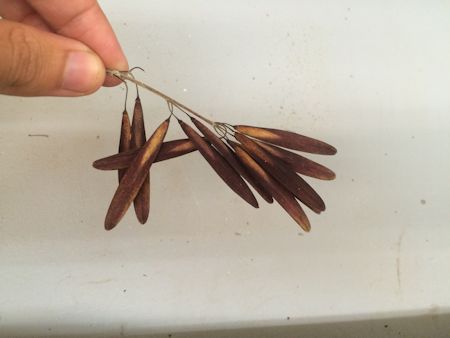 In September 2015, a team from the North Carolina Botanical Garden, working with National Park Service staff and the Friends of Dyke Marsh, collected thousands of pumpkin ash seeds (by the bunch, pictured) from a score of different trees in the preserve.  The team has concluded that the seeds are likely viable and in early 2016, they are drying them for long-term storage.

The seeds may later be used in an attempt to repopulate some pumpkin ash trees in Dyke Marsh, if the trees are devastated by an emerald ash borer infestation, as some predict.  The emerald ash borer is a non-native, devastating insect that is moving through Northern Virginia and other areas.  The seed collection complements FODM's ongoing efforts to preserve a viable stand of pumpkin ash trees in the marsh.  To learn more about our efforts, see “Saving Pumpkin Ash Trees” below.