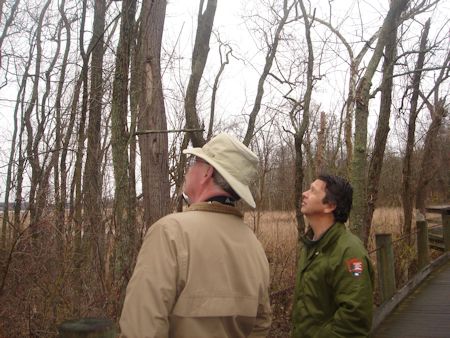 FODM and the National Park Service (NPS) have undertaken a project to save some of the preserve's pumpkin ash trees  (Fraxinus profunda) from the emerald ash borer (EAB) (Agrilus planipennis), an invasive insect that has been documented in Northern Virginia and will kill all species of ash trees, according to U.S. Department of Agriculture experts.

In the spring 2016, we contracted with Bartlett Tree Experts to conduct an insecticide treatment into the root flares of nine selected trees.  In the photo at left, Robert Smith from FODM and Brent Steury from NPS were members of the project team that identified trees for treatment. In September, four North Carolina Botanic Garden staff members, with the assistance of Peter McCallum and Brent Steury of the NPS and Robert Smith, collected pumpkin ash seeds in Dyke Marsh for preservation. They met their goal to collect 10,000 or more seeds from 25 or more trees. These seeds will be available in the future to help in the marsh's restoration and to replace trees expected to be lost to the EAB.  The Friends of Dyke Marsh hope to help NPS maintain a small but healthy breeding stock of pumpkin ash trees. Read more about "Trying to Save Pumpkin Ash Trees" on our "Marsh Life" page under "About the Marsh."