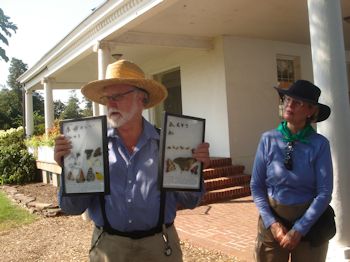 On August 30, 2015, FODM partnered with the American Horticultural Society and Georgetown University's Center for the Environment on a pollinator walk at River Farm, headquarters of the American Horticultural Society.  Dr.  Edd Barrows, Georgetown entomologist (pictured with Eleanor Quigley), and Ms. Sylvia Schmeichel, AHS horticulturalist, led the two-hour walk for 30 enthusiasts in the five-acre, André Bluemel Meadow and some of the gardens.  To create the meadow, volunteers hand-planted over 100,000 plants, including over 75 species and cultivars of grasses and herbaceous perennials, 90 percent of which are native to North America.

Some of the plants and many of the animal pollinators at River Farm are also in the Dyke Marsh Wildlife Preserve.  Here are a few highlights of the walk: (Photos contributed by Glenda Booth)