Bald Eagles and Ospreys Put on a Show 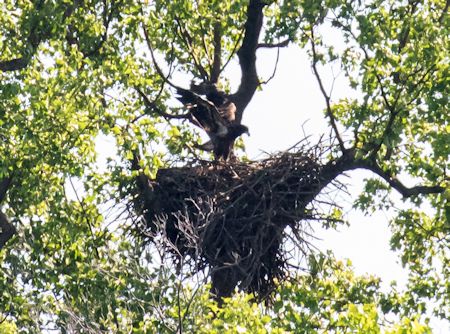 The eaglet flaps its wings in preparation for flight.

In early May 2021, the eaglet pair in one of the nests in Dyke Marsh is growing up.  They are often visible to visitors.  The flapping eaglet is exercising its wing muscles, in preparation for flight.  Young bald eagles typically fledge in Northern Virginia in June.

In these stunning photographs by Ashley Bradford taken on May 2, one of the eaglets leapt up and flapped and got up above the edge of the nest before dropping back down into it. 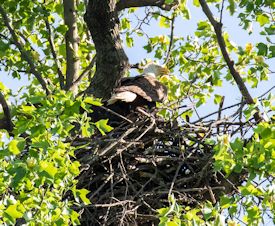 The adult eagle returned to the nest with the fish just taken from the osprey.

An adult eagle made a flyby and zeroed in on a nearby osprey gamely hauling its catch back to its own nest.

Probably doomed from the start by the larger, more powerful bald eagle, the osprey led a good chase and finally gave up the fish and took off.  The photos show that the eagle zoomed in for the grab and missed. It had to dive down after the fish, then brought it to the nest for the youngsters.

The Dyke Marsh Wildlife Preserve has three active bald eagle nests in 2021.  We have not determined the number of active osprey nests as of early May but hope to document them in the annual breeding bird survey.