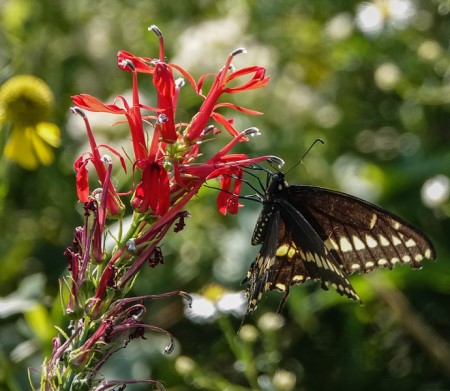 Since 2016, volunteers from FODM and the Audubon Society of Northern Virginia have conducted surveys of butterflies, dragonflies and damselflies in Dyke Marsh from April to October. Here are the total numbers of species documented from 2016 through September 23, 2020: butterflies, 50 species; damselflies, 12 species; dragonflies, 37 species. While surveying, they also document other insects.

Below are a few examples. Thank you, surveyors and thank you Rusty Moran for these beautiful photos.

Black swallowtail butterflies (Papilio polyxenes) , shown left, are one species in the swallowtail butterfly family (Papiliionidae), so-called for the tails that trail off their hind wings. Observers commonly see them from Canada through South America, including Northern Virginia. The pictured butterfly is nectaring on a cardinal flower (Lobelia cardinalis).

The great blue skimmer dragonfly (Libellula vibrans) belongs to a large family of dragonflies called “skimmers,” which tend to live near lakes, ponds and slow-moving rivers and streams. For dragonflies, they are relatively large, up to 63 millimeters (almost 2.5 inches).

Damselflies, like the orange bluet damselfly (Enallagma signatum), belong to the same order, Odonata, as dragonflies. Damselflies tend to be smaller and slenderer. At rest, damselflies typically fold their wings alongside their bodies, while dragonflies hold their wings perpendicular to their bodies. A group of damselflies species called “spreadwings” are an exception to the rule. Both damselflies and dragonflies have large eyes relative to their head size, but a space separates damselfly eyes, while dragonfly eyes touch, or nearly touch, each other. Both are agile fliers and prey on insects, including each other.

People admire monarch butterflies (Danaus plexippus) for their beauty and their unique, long-distance migration. Monarchs east of the Rocky Mountains begin migrating in the late summer and early fall to central Mexico’s mountains where they congregate and overwinter by the millions. The overwintering individuals migrate only part of the way north in the spring. They produce another generation that moves a little further north. That generation produces another generation that moves a little further north, and so on. It takes three to four generations of monarchs to reach the northeast.

Jamestown colonists introduced the western honeybee (Apis millefera), also called the European honeybee, to North America in 1622. It is widely known as a pollinator of plants and for their production of honey and wax.

The yellow garden spider (Argiope aurantia), also called the black-and-yellow garden spider, and many other common names, is easily identified by its distinctive yellow pattern on a black background. It is one of many “orb-weaver” spiders, which build circular webs. The spiders and their webs are commonly found in gardens, fields and forests.