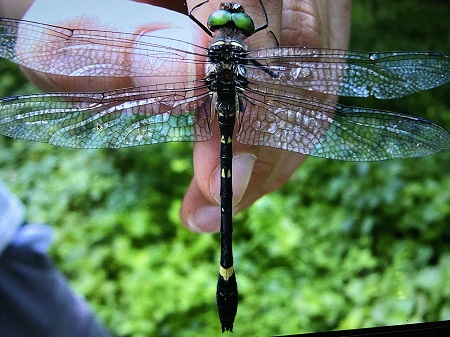 On August 19, 2020, Ed Eder identified a dragonfly species in Dyke Marsh, the Swift River cruiser (Macromia illinoiensis illinoiensis), never before documented in the preserve.
These dragonflies are about three inches long and have bright green eyes and a single yellow thoracic side stripe. They have yellow spots along the length of their abdomens. Males have a slightly clubbed tail.

Swift River cruisers are believed to be the fastest dragonflies in North America, flying up to 40 miles per hour at times.  “Males fly patrols 50-plus yards long, mostly near the bank and primarily in the morning,” according to Dragonflies through Binoculars by Sidney W. Dunkle (Oxford University Press, 2000). “At cool temperatures they have one of the fastest sustained cruising speeds of any of our dragonflies, but at warm temperatures they fly by alternative flits and sails on raised wings,” according to Dunkle.  When at rest, they hang vertically from a twig.  Thank you, Ed for your sharp observations.