Marsh Wrens, a Glimmer of Hope? 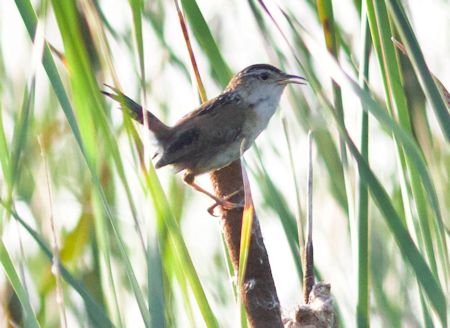 In early August 2020, FODMers observed two or three male marsh wrens (Cistothorus palustris) in Dyke Marsh in what FODMers call “the Big Gut.” It appeared that none of the birds had a mate and since it was so late in the breeding season, the observers believe that it will be unlikely for these birds to attract a mate this year so late in the season.

These volunteers heard the unmistakable bubbly call of the marsh wren and saw several dummy nests but no complete nest. This male likely represents the remnant population of what was once a thriving marsh wren colony and is a reminder of the fragility of the habitat and the loss of significant marsh acreage in the preserve.  See “Restoration.”

The last time FODMers documented a breeding population of marsh wrens was in 2014.  There was one active nest in 2017 based an observer seeing a nest with a lining, indicating a female had finished construction.

Larry Cartwright, leader of the FODM breeding bird survey for 24 years, says, “We may get a handful of males in the future.  The only year that at least one didn’t show up after the breeding population finally collapsed after 2014 was 2019.  It has no significant meaning for the future. It was thrilling to see this reclusive wren that is the symbol of the Friends of Dyke Marsh. Unfortunately, these sightings do not indicate a resurgence of marsh wrens in Dyke Marsh.”

Marsh wrens are small brown birds that live in marsh cattails, bulrushes or cordgrass and are known for their distinctive calls. Marsh wrens were once common in the Dyke Marsh Wildlife Preserve and until recent years, the marsh supported the only known nesting population in the upper Potomac River tidal zone.

They typically breed in fresh and brackish marshes, usually in areas of dense, reedy vegetation and construct elaborate football-shaped nests with round openings by weaving grasses or cattail leaves in a circular manner anchored to reeds or cattails a few feet above the water. The male builds several “dummy nests” nearby, presumably to trick predators or attract mates.