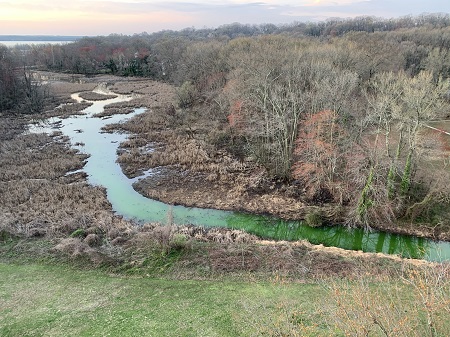 By 9:30 a.m., the tide had apparently carried the green water out of that part of the marsh and it was not visible at high tide that day or the next day.

The county officials conducted some tests, which they described like this: “The stormwater investigator collected a sample for analysis in the office. He found no detergents in the sample. Dissolved oxygen was 6.0 mg/L and pH was 6.5, both meeting state water quality standards. Specific conductivity was 500 µS/cm3, which is not unusual for urban streams; we would normally flag at around 1,000 µS/cm3.”

In the mid-afternoon, George Washington Memorial Parkway Superintendent Charles Cuvelier informed us that the DEQ authorities identified “green dye” as a possible cause of the discoloration and he said that it is "not practical" to try to find or isolate the source.  We have not received reports that confirm that a dye was the source or cause.

Several people said that managers of sewage systems and plumbers at times use dye to test their systems. No one confirmed that those tests had been conducted in the area.

Both County and DEQ officials reported that they observed fish, turtles and frogs during their site visits.  They did not provide reports on the presence of other wildlife, including aquatic organisms, or on the impact of the discolored water on other natural resources in the marsh.