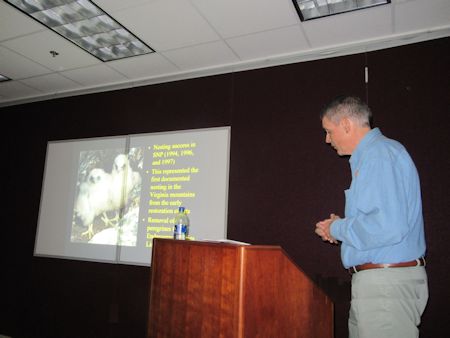 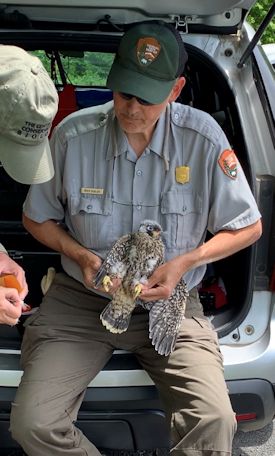 NPS biologist Rolf Gubler is a team member on the peregrine falcon restoration project.Biologists bring peregrine falcon chicks from eastern Virginia bridge nest sites to the park’s high ledges, part of Virginia’s central Appalachian Mountains and once part of the birds’ historic range.  Scientists hope the peregrines will imprint on the park's cliffs and return as breeding adults in two to three years, Gubler explained.

Peregrines are found in rural and urban environments and on every continent except Antarctica.  They perch and nest on cliffs, skyscrapers, water towers and other tall structures where mammalian predators cannot reach them.  Highly territorial, they make nests usually seven to ten miles apart.

They use river systems and coastal areas where there is a reliable prey base.  First-year mortality can be as high as 71 percent because the young birds die from collisions with utility wires and glass windows, storms, starvation and great horned owls.

In mid-June, people may be able to see the young birds in the park from the overlook at milepost 49.

You can learn more at https://www.nps.gov/shen/learn/nature/falconhacking.htm.