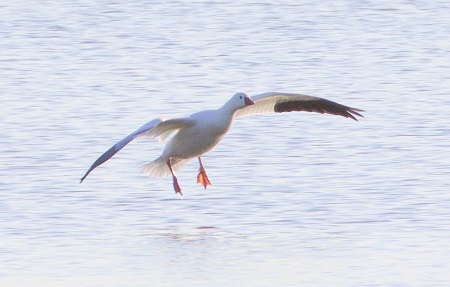 This goose is white with black wingtips and considered the smallest of the "light" or snow geese. Ross's goose has a short neck, rounded head and a stubby bill with no "grin patch" seen in its larger cousins due to their curved tomium, the cutting edge of the bill, Ed explained. More mature birds, particularly males, have warty gray tubercles at the base of their bills, said Ed.

These birds nest in the low Arctic tundra.  According to the website, 10,000 Birds, 95 percent nest in the Queen Maud Gulf Migratory Bird Sanctuary in the central Canadian Arctic.  There are an estimated two million Ross’s geese currently.