Wildlife in a Changing Climate 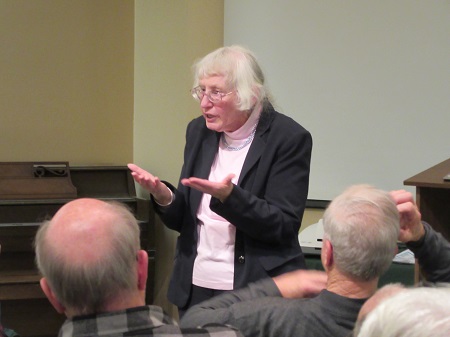 On November 13, 2019, at FODM’s quarterly meeting, Dr. Sally Valdes outlined several ways that climate change is adversely affecting wildlife.  Introducing the topic, she said that carbon dioxide and other greenhouse gas emissions have risen to levels unprecedented in the last 800,000 years.  Carbon dioxide concentrations have been tracked continuously at the Mauna Loa Observatory in Hawaii since 1958 and the trend has been steadily upward, from about 315 parts per million (ppm) to 414 ppm in the spring of 2019.

Among many consequences, she offered these:

Some wildlife species can adapt, like those able to move, but the rate of change is so fast that many species cannot adapt fast enough.
She urged attendees to plant more trees and vegetation, use more non-carbon-based energy and preserve wetlands and grasslands, among other steps.
Dr. Valdes is a retired U.S. Department of the Interior biologist.
Cosponsors were the Faith Alliance for Climate Solutions, the Friends of Huntley Meadows Park and the Friends of Little Hunting Creek.