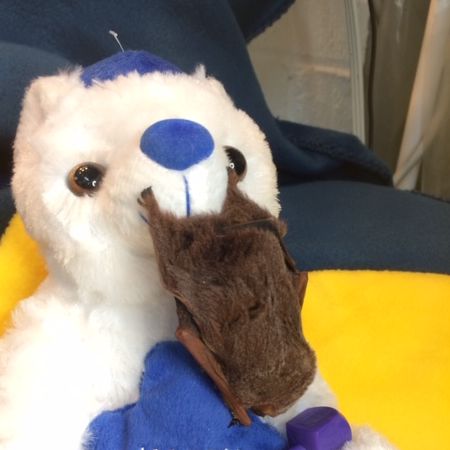 Seminole Bat. Their habitat is historically no further north than Georgia. Photo by Deborah Hammer

FODM Board of Directors’ member Deborah Klein Hammer saves bats and is featured in a September 16, 2019, article in “DCist” here.

Deborah studies Brazilian freetail (Tadarida brasiliensis) and Seminole bats (Lasiurus seminolus) in Dyke Marsh.  Around 2013, a Brazilian free-tailed bat came into care of the Save Lucy Campaign (www.savelucythebat.org/), an organization devoted to rehabilitating injured and orphaned bats and educating the public about the importance of bats.

When this bat arrived in Virginia, many saw her appearance as mysterious because Brazilian free-tails historically have not been documented further north than Texas or Florida.  In her regular acoustic monitoring of the bats in Dyke Marsh, Hammer discovered that the free-tails were visiting the marsh. Soon other people were spotting free-tails in Virginia as well. The free-tail bats’ numbers seem to be increasing each year and Hammer has picked up their echolocation in Dyke Marsh on warm winter evenings, indicating that they are probably hibernating nearby, says Deborah.