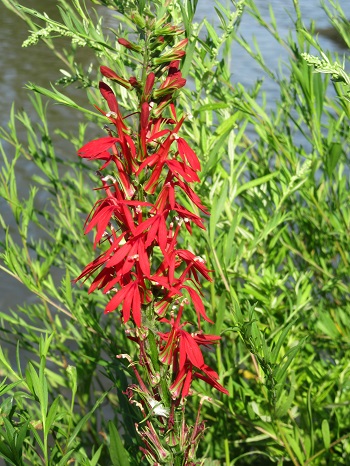 The brilliantly crimson cardinal flower (Lobelia cardinalis) brightens the marsh in late summer and early fall.  A perennial, it typically stands erect, rising from a tangle of green foliage and commands attention because of its scarlet hues.  It can be from one to six feet tall. 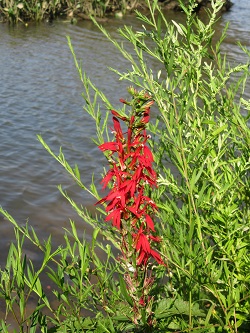 Some say that this showy plant gets its name from early French explorers who were so taken with its color that they sent it back to France as a sample of the New World and gave the plant its name because the blossoms suggest the rich, red robes of Roman Catholic cardinals.

The tube-shaped flowers have two lips, the upper with two lobes and the lower, three.  It is a favorite of hummingbirds because their long tongues can reach the nectar in the flower’s long tube.  Native Americans likely used it for medicinal purposes.