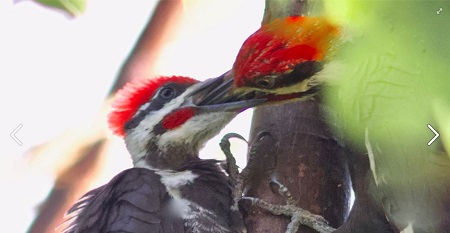 In June 2019, FODMers observed pileated woodpeckers in Dyke Marsh feeding young, corroboration of successful nesting, and observers saw a male pileated feeding grubs to a fledgling male that appeared larger than his parent. After that, the young pileated moved and surveyed a branch in a cottonwood tree that had an abundance of carpenter ants. He feasted on his prey, using his long sticky tongue to access them.

The pileated woodpecker (Dryocopus pileatus) is one of the largest forest birds in North America, typically around 15 to 19 inches in length.  Because of its striking red crest, it’s often been dubbed “Woody Woodpecker,” the fictional, animated, Lantz Studios character on television’s “Woody Woodpecker Show,” starting in 1957.  These birds drill rectangular-shaped holes in dead trees and fallen logs, searching for carpenter ants and other insects.

The invasive emerald ash borer is killing hundreds of ash trees in Dyke Marsh.  Some predict an eventual increase in woodpecker numbers and activity because of the dead trees.

Thanks to Ed Eder for these beautiful photographs.