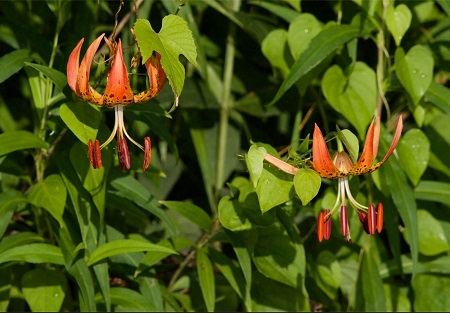 On July 2, 2019, FODMer Ed Eder photographed Turk’s cap lilies (Lilium superbum) while canoeing in the southern big gut of Dyke Marsh.  Ed commented that a few clusters remain, having “survived despite profound erosion.  How long they will hang on is difficult to ascertain, but the Lilium superbum is a gem in any wetland and difficult to locate at all in Fairfax County.”

This plant, which can be four to eight feet tall, is the largest of the native lilies. Its flower stem typically has several somewhat drooping, orange flowers, with recurved petals and reddish-brown spots. These lilies typically bloom from July to September in the eastern U.S. and like moist, humusy soils.  They may get their name from a type of cap worn by early Turks.