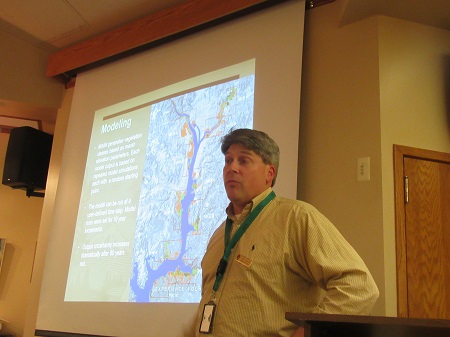 Geoffrey Sanders presented the results of his study and explained the modeling he used. Credit: Glenda Booth

The rate of relative sea level rise along the tidal Potomac River is around 3.33 millimeters a year according to long-term water level data collected by the National Oceanic and Atmospheric Administration (NOAA), reported Geoffrey Sanders on May 15, 2019, to 65 people who attended FODM’s quarterly meeting.  Sanders is the Network Program Manager for the National Park Service’s National Capital Region Inventory and Monitoring Network.

The network has nine monitoring sites in Dyke Marsh that measure elevation dynamics over time. He is seeking to learn the rate at which marsh elevation is changing and if the rate of change is sufficient to maintain pace with relative sea level rise. These data were also used to inform a modeling project aimed at projecting marsh change over time under various sea-level rise scenarios.

Stressing the uncertainty of modeling results, Sanders described the Marsh Accretion and Inundation Model (MAIM) and indicated that Dyke Marsh habitats could change significantly by 2080.  The model suggests that over time the higher marsh vegetation such as cattail (Typha sp.) will be lost and replaced by lower marsh species such as Peltandra and Nuphar, he said.

He noted that while the rate of elevation gain across the marsh is currently adequate to keep pace with long-term sea level rise, current projections predict that the rate of sea level rise will increase and may eventually exceed marsh elevation gain. The modeling results supported this by illustrating the conversion of higher marsh habitats to lower marsh and lower marsh to open water.  The MAIM model does not consider the marsh restoration efforts now underway or erosive forces on the marsh, but it will be very interesting to see how the restoration efforts impact marsh elevation dynamics.  Models are useful planning tools, but he concluded, “No one can predict the future.”

The May 22 Mount Vernon Gazette newspaper, in an article by Jerry Fill, reported on the talk. You can read their article here.