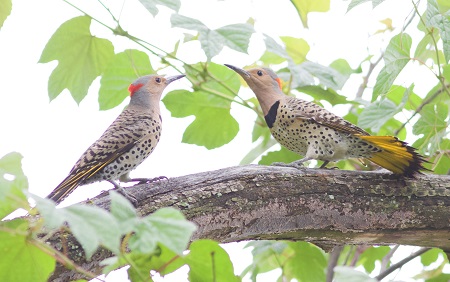 Ritual combat is often used among birds to settle disputes over territories or mate selection. Most of the time the postures assumed appear threatening but avoid serious contact or injury. Northern flickers (Colaptes auratus) are known for their elaborate ritual flights which involve tail flashing, bill pointing and circling as well as lunges and chase flights. Both sexes participate in ritual combat and the presence of an observer of the opposite sex intensifies the aggression, which may last for hours, with pauses. 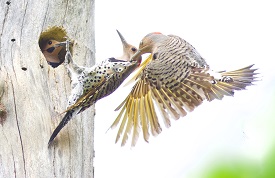 On May 6, 2019, two female flickers in Dyke Marsh engaged in a ritual duel lasting over one hour, without significant interruption, while the male viewed the conflict from the safety of the nest hole (photo right).

During two brief pauses, he emerged to mate with the dominant female. The conflict did not end until the preferred female speared the other female in the neck with her bill. Following that, the two tumbled with grappled claws and the vanquished female vanished in the undergrowth.

Flickers are large, brown woodpeckers with a black bib, black-scalloped, back plumage and white rumps observable when they are flying.  The flickers in the photographs are called yellow-shafted; they flash bright yellow in their wings in flight.  Their counterparts in the western U.S. flash red.  These birds normally feed on the ground.

Thanks to Ed Eder for these stunning photographs.