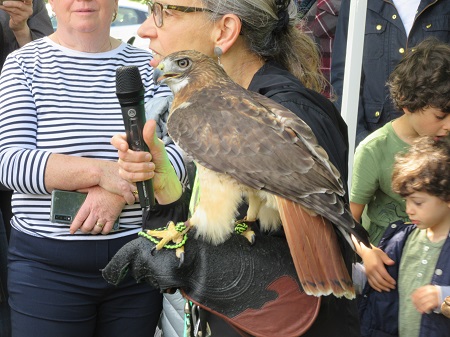 Liz Dennison explained how raptors differ from other birds.

On April 20, 2019, 250 people of all ages, from babies in snugglies to seniors, were wowed by raptors at the annual Friends of Dyke Marsh (FODM) Raptor Rapture event in Belle Haven Park by the Potomac River.

Liz Dennison from Secret Garden Birds and Bees brought a barred owl (Strix varia), two Eastern screech owls (Megascops asio), a red-tailed hawk (Buteo jamaicensis) and a red-shouldered hawk (Buteo lineatus), birds that had been injured and cannot survive on their own. 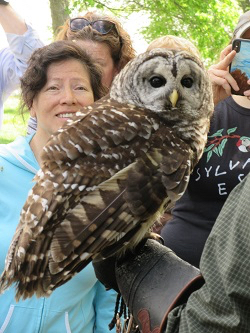 Barred owlThe barred owl, for example, had had broken bones from a vehicle collision.  One of the screech owls had lost an eye.  People learned about both red and gray morph screech owls and their handlers explained that these owls are excellent at camouflaging in trees because their plumage blends into a tree’s bark.  Youngsters asked questions like, “Do owls eat worms?” “Does that hawk ever have a yellow tummy?”  “Where do they sleep at night?”

Cindy Wackerbarth with the Monarch Teacher Network brought a tiger swallowtail chrysalis and explained the life cycle of butterflies.  FODM had birds for youngsters to color.  Ospreys soared overhead.