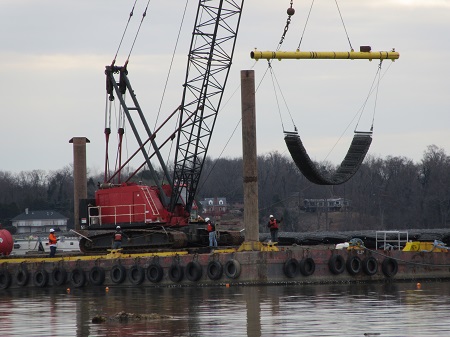 A crane lifts a marine mattress off the barge. Photo by Glenda Booth

In early January 2019, the Dyke Marsh restoration breakwater became more and more visible as crews from Coastal Design and Construction continued to install 50 to 55 “marine mattresses” each working day.  By January 8, they had placed 2,900 in the south marsh.  On January 9, crews on a work barge and a rock barge began putting armor stone on top of the mattresses near the shoreline.  A surveyor on the shoreline monitors the tide level and helps ensure that the mattresses are placed at the right elevation. 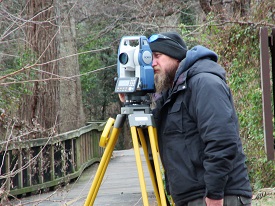 Matthew Younkins, the surveyor on the shoreline, reads the tide gauge and makes sure the mattresses are positioned right.The breakwater is the first stage of Dyke Marsh restoration.  U.S. Geological Survey and National Park Service (NPS) experts concluded that a breakwater in the southern marsh should be the top restoration priority.   A promontory removed by the dredgers between 1940 and 1972 altered the hydrology of the marsh and Dyke Marsh will be gone by 2035 without action. The breakwater is intended to replicate the former promontory.  The breakwater would “redirect erosive flows in the marsh, particularly during strong storms and would re-establish hydrologic conditions that would encourage sediment accretion,” says the NPS 2014 plan.