Exploring the Ecology of Dyke Marsh 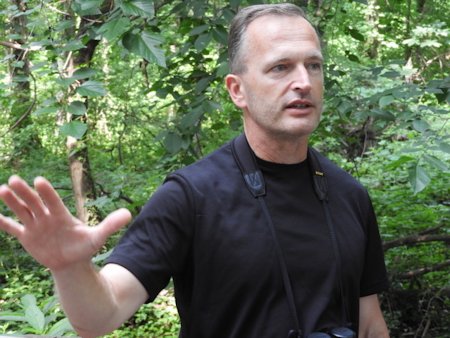 On June 9, 2018, Dyke Marsh members and friends learned about Potomac River wetland ecosystems and the interrelationships of plants, insects, birds and other biota, on a walk on the Preserve’s Haul Road trail led by Charles Smith, expert naturalist and Chief of Fairfax County’s Stormwater Planning Division, Watershed Projects Implementation Branch. He also discussed human intervention and how native Americans used some of the marsh plants.

The Haul Road is man-made higher ground between lower elevations of the Dyke Marsh wetland ecosystem, Charles explained. Within 80 years, the Haul Road will likely be under water due to sea level rise exacerbated by global warming, according to several studies. The U.S. Army Corps of Engineers is doing a detailed study on this subject that should be out in two and a half years. This area was under a greater tidal influence in the past and will be again. 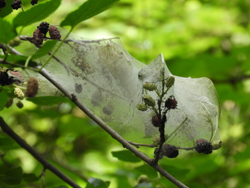 Native insects tend to not eat invasive species. When invasive plants push out native species, the insects that feed on them are lost. A basic ecological rule is that if insects cannot eat a plant species, they are not fulfilling an ecological role. It is the insects that get the energy from the trees out into the rest of the food web, a process called trophic transfer. Birds then feed on the caterpillars and the caterpillars are an especially important food source for birds that feed their young in the nests.

The efficiency with which energy or biomass is transferred from one trophic level to the next is called ecological efficiency. 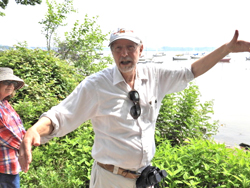 FODMer Barry Sperling discussed the cloud formations of the day.FODMer Barry Sperling discussed the cloud formations of the day. There was very high humidity which created a bluish and hazy air. The high humidity went up to 10,000 feet, Barry explained. He said that drier air is present at 10,000 to 16,000 feet. Above 16,000 feet, the air gets humid again. Weather forecasters predicted cold air from the northwest to come in and push up the warm humid air later in the day. High cirrus clouds typically  provide moisture in the upper levels. 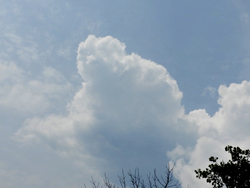 Cumulus congestus cloudCharles added that the plants are very busy pulling water from the ground and pushing it into the air through transpiration, adding to the moisture in the air.

Heat of vaporization is released when moisture goes from gas to liquid. This causes the moist air to rise, resulting in more and more heat. The clouds can go up to 60,000 or even 80,000 feet in the great plains. In Northern Virginia, they rarely go above 40,000 feet because the conditions are not right for it, Barry commented. The pictured cloud is cumulus congestus and it is named cumulonimbus when rain is produced.

Photos contributed by Bob Veltkamp. Here are more of his photos from the walk: 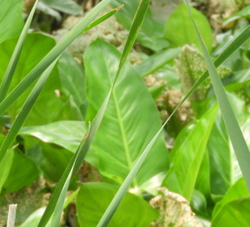 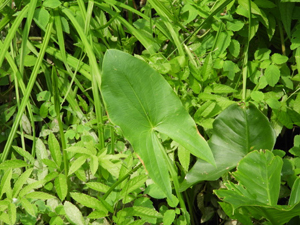 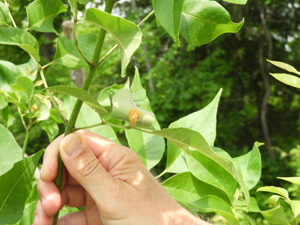 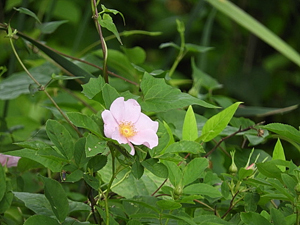 Swamp rose, (rosa palustris), a native wet soil plant, is not found in the very wettest soil.Pumpkin ash (Fraxinus profunda) is a native tree that is dominant in marshes.  In Dyke Marsh, it was the dominant species covering large areas of the marsh.  FODM has worked with the National Park Service to treat some of these trees to try to keep them healthy.  There are large areas of dead trees in Dyke Marsh, especially to the south, that have died because of the non-native ash borers.  This pumpkin ash in the photo has some fungus growing on a leaf.