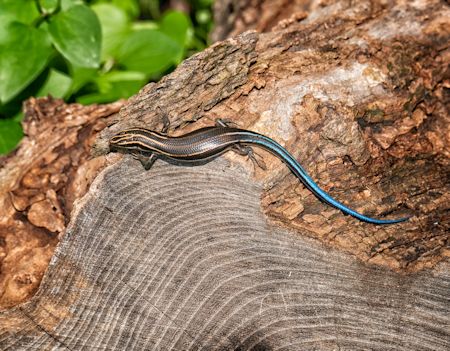 Dyke Marsh visitors have had some good skink sightings this spring 2018.  A skink is a type of lizard, typically shiny and with short or no limbs.  Most skinks have tapering tails that they can shed if predators grab them and they usually can regenerate the lost part of the tail. Skinks move quickly.

Virginia has nine native lizard species, according to Alonso Abugattas, Arlington County Natural Resources Manager.   Six of these species are likely in the Washington, D.C., region.  “All lizards native to Virginia in the genus Plestiodon have bright blue tails as juveniles/subadults,” according to the Virginia Herpetological Society’s website.

Rusty Moran took these photographs in Dyke Marsh on May 23, 2018, of the common five-lined skink (Plestiodon fasciatus), which is on average five to seven inches long and generally prefers moist habitats. Males lose their stripes and have reddish heads during the breeding season.

In these photos, the colorful one in the first picture is a juvenile. The pair are male and female adults. The male, with the reddish coloration on the head, was intent on mating.