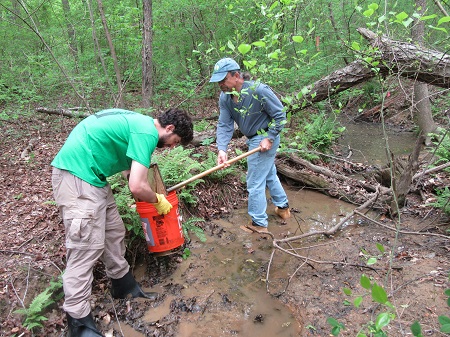 Dan Schwartz and Jeff Pandin scoop up sediment for examination.

Determining the habitat quality of a stream flowing into Dyke Marsh from the west was the quest on May 5, 2018, when FODM volunteers conducted some biological testing of the stream flowing through Mount Vernon District Park.  FODMers partnered with the Westgrove Dog Park PACK organization and led by Dan Schwartz, Northern Virginia Soil and Water Conservation District, took 20 samples from the stream within a 300-foot span, with the goal of identifying 100 living invertebrates. The group found 55 invertebrates, fewer than the desired 100.  Forty of the 55 were scuds, considered to be impairment tolerant organisms.

The type of invertebrates in a stream is one indicator of stream quality. Some species are tolerant of degraded environments and others are very sensitive.  Most streams in Fairfax County are impaired.

The stream received a score of 9.  The scoring system that rates ecological condition is as follows:  >14, acceptable; 8 to 14, partially acceptable; <8, unacceptable.
"The more diversity, the healthier the stream,” Dan explained.
When the group tested the stream in 2016, the health score was 6, so slight improvements have occurred since then.  Finding seven caddisflies is encouraging, Schwartz noted.  The group wanted to conduct tests in 2017, but the streams were dry during the testing season.
Thank you, Dan, and volunteers, Ned Stone, Barry Spangler, Jeff Pandin and Scott Erb.

Photos for this article were contributed by Glenda Booth.