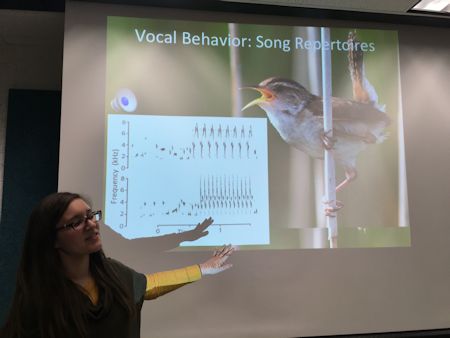 “Marsh wrens are special, very charming birds,” Dr. Sarah Luttrell told the Friends of Dyke Marsh on February 25, 2018.   Her presentation focused on how comparing multiple traits, including plumage color, size, shape, vocal behavior and genetics, reveals a pattern of evolution.  “Genetic variations are very high within a marsh,” she said.

There are 14 subspecies of marsh wren (Cistothorus palustris).  Dr. Luttrell studied five subspecies at 20 wetland sites in the U.S. and measured 29 traits after capturing the birds with mist nets.

Marsh wrens  weigh 11 grams, the weight of 11 paper clips, and are widely distributed. They like standing water and tall vegetation, and are polygamous.  They have a “free-for-all” mating system, she commented.  A male can build up to 20 nests, making it difficult for people to monitor breeding.  The birds’ genetics change gradually along their ranges, with the populations being very different at each end of their range.

“Dyke Marsh is really a special place globally,” she said, explaining that freshwater tidal marshes are rare globally and that animals that live in marshes are “specialists,” requiring very defined conditions for survival, in contrast to “generalists” that can live in many habitats. 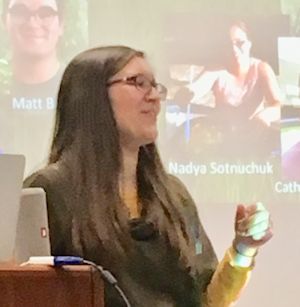 Dr. Luttrell. Photo by Claire KluskensDr. Luttrell offered a glimmer of hope for Dyke Marsh’s marsh wrens.  Surveyors have not confirmed breeding marsh wrens since 2014 in the marsh.  She noted that population numbers fluctuate greatly, calling the numbers “unreliable.”  “In one year there can be 40 breeding pairs; the next year, two,” she said.

Historically, Dyke Marsh was the only known nesting area of the marsh wren in the upper Potomac River tidal zone.  In 1950, observers counted 87 singing males in Dyke Marsh.   In 1999, surveyors confirmed 34 territorial males and 14 breeding females.  In 2014, there were at least 16 territorial males and a minimum of six nests.  Most experts contend that loss of habitat is a major contributor to the wren’s decline in Dyke Marsh, but the cause has not been definitively determined.

Dr. Luttrell received her Ph. D. in Biological Sciences in 2017 from the University of Maryland, Baltimore County and works in the Feather Identification Lab of the Smithsonian Institution’s Museum of Natural History.