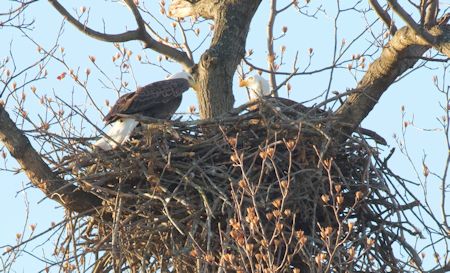 As of early February 2018, three bald eagle pairs have active nests in the Dyke Marsh Wildlife Preserve.  Observers have seen eagles taking sticks to nests, pairs perched, females incubating eggs and a male taking prey to a female on the nest.

Bald eagles lay two to three eggs in late winter and females incubate the eggs for five to six weeks.  Between May and July, chicks fledge at 10 to 12 weeks of age.  Nest construction, breeding, nesting and eaglet hatching do not always succeed.

FODMer Larry Cartwright has conducted breeding bird surveys in Dyke Marsh for 23 years.  Asked why he counts eagles, he told the Mount Vernon Voice newspaper, “A love of nature often begins with appreciation of large and highly visible animals like bald eagles or bison and works its way down to a deeper understanding of organisms that are less noticeable, but equally important.  I like to think of it as the trickle-down theory of nature observation.” 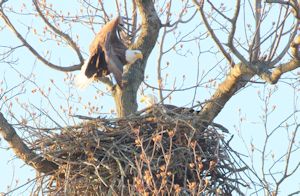 Bald eagles are a conservation success story, having made a dramatic comeback after near extinction in the lower 48 states.  In the 1700s, there were around 100,000 nesting bald eagles in the lower 48 states.  The numbers plummeted to 417 known nesting pairs by 1963 and in 1967 the federal government listed them as an endangered species.  By 2007, the eagle population had grown to an estimated 9,789 breeding pairs and the U.S. Fish and Wildlife Service “delisted” the bird.  Experts attribute a ban on the insecticide, DDT, as the critical factor supporting the bald eagle’s recovery.  DDT was linked to thin-shelled eggs that cracked before chicks could hatch.

In the 1970s, Virginia had around 30 breeding bald eagles.   By 2017, the state had more than 1,200 breeding pairs in coastal areas of the state, report William and Mary’s Center for Conservation Biology (CCB) scientists. 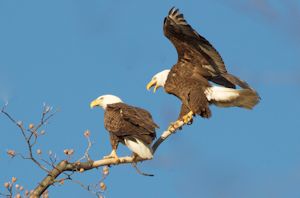