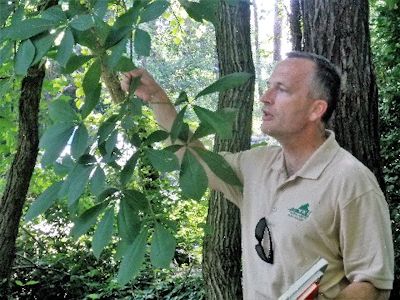 Charles said that the horse chestnut tree (Aesculus hippocastanum) at the beginning of the Haul Road is an early succession species and grows well in disturbed systems.

It was all about geology, plants, forests, wetlands, uplands, birds, mammals, reptiles, insects, how everything interrelates and more on the June 10, 2017, ecology walk with Charles Smith, expert naturalist and Chief of Fairfax County’s Stormwater Planning Division, Watershed Projects Implementation Branch.

Smith described the geology of Virginia’s coastal plain and told the 35 enthusiasts that the Dyke Marsh Wildlife Preserve’s Haul Road trail, around seven feet above sea level, could be under water by the end of the century because of sea level rise.

The Haul Road, basically fill, was built by Smoot Sand and Gravel, the company that dredged away almost half of Dyke Marsh between 1940 and 1972.  Both sides of the Haul Road represent “decades of disturbance and re-disturbance. It’s a very compromised landscape,” Smith told the group.  Nevertheless, throughout the preserve, there are different habitat types, a rich biodiversity and many valuable natural resources.

Among many other sightings, walkers spotted an orchard oriole (Icterus spurius) and an Eastern garter snake (Thamnophis sirtalis sirtalis), as red-winged blackbirds (Agelaius phoeniceus) called vociferously and ospreys (Pandion haliaetus) soared and hovered.  Known bird nests near the Haul Road this spring are those of the Eastern kingbird (Tyrannus tyrannus ), yellow warbler (Setophaga petechia), warbling vireo (Vireo gilvus), orchard oriole and two cedar waxwings (Bombycilla cedrorum).  Ed Eder reported that there are eight or nine nests within several hundred yards beyond the “dogleg.” The group was encouraged by a marsh wren (Cistothorus palustris) calling.  For the first time in over 20 years, FODMers did not document marsh wrens nesting in Dyke Marsh in 2015 or 2016.