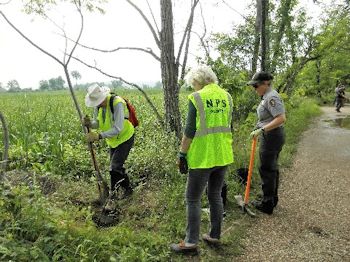 On May 31, 2017, eight enthusiastic FODMers planted another 30 native shrubs and trees along the Haul Road trail east of the “dogleg” turn along the trail, led by NPS staffers Melissa Westbrook and Colin Davis.  This planting was in addition to the 40 plants put in on April 25, 2017.

The table at right lists the tree and shrub species that FODMers and NPSers planted on these two days this spring.

NPS horticulturalist Melissa Westbrook explained that most of the plants are facultative, which means they are plants that grow in wetlands but can survive in non-wetlands.  These native plants can provide valuable habitat for native insects, birds and other critters.

The plants have blue plastic tags or flags.  FODM invites everyone to help the plants survive and, for example, to stay on the dirt trail and keep pets on a leash and on the trail.