The Ospreys Have Returned 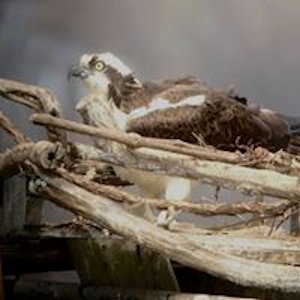 On March 7, 2017, we welcomed the return of ospreys (Pandion haliaetus) to the Dyke Marsh Wildlife Preserve.  Ed Eder reported that “the female quickly began rearranging sticks on the nesting platform” at the Belle Haven Marina.  “She directs the construction although the pair both gather nesting material,” Ed observed.  Ed, an expert naturalist and birder, said that the male has used this platform for nearly 10 years.

Ed could identify the male as a “returner” because the osprey has an iris defect in his left eye.  The female has dark feathers that form a band on her breast.  The male is mostly white in the upper chest.  Most ospreys mate for life.

Most years, there are around 10 active osprey nests in Dyke Marsh.  Ospreys are known as “fish hawks” and many FODMers have watched them catch fish with their long talons and fly with the fish’s head first, aeronautically advantageous, reducing wind resistance.  Ospreys have made a successful comeback since the 1970s after some pesticides were regulated.  Scientists concluded that some pesticides, including DDT, caused thinning of the birds’ eggshells, making nesting success difficult. Photos by Ed Eder.