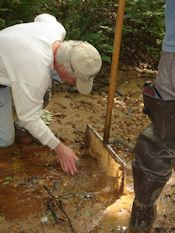 The findings are disappointing, but not surprising.  Most streams in Fairfax County are impaired.

Frog and Toad Surveys Are Underway

Thanks to members Laura Sebastianelli and Deborah Hammer, FODMers are conducting a frog and toad survey in Dyke Marsh and other areas, as part of the FrogWatchUSA national monitoring program.  People living near Dyke Marsh West have heard fewer frog and toad calls in recent years and FODM would like to document species and trends.

Do Trees Have Antifreeze?

FODM Board member Jessica Strother, a forester, led a walk on February 27, 2016, and described three of the ecotones of the preserve:  the swamp forest, the floodplain forest and the tidal marsh.  She explained that trees breathe through their leaves and root system.  Trees like the pumpkin ash tolerate water, but cedars like drier, upland soil.

On February 28, 2016, Dr. David Luther, George Mason University biology professor, gave a presentation to FODMers and friends on his research analyzing the effects of noise on birds’ communication, a field called “acoustic ecology.”  Generally, birds sing to attract mates, to defend territories and to establish “social status,” he told the 75 attendees.  In urban areas, anthropogenic noise, like the noise from traffic or gardening tools, can cause birds to change their behavior and their songs.

On February 22 at Belle Haven Park, several members of the Friends of Dyke Marsh attended and helped release 21 Canada geese that had been oiled and cleaned by staff of Tri-State Bird Rescue and Research of Newark, Delaware.

FODMers and others reported to local, state and federal authorities on February 3 that an oil sheen was in the water at the Belle Haven Marina.  Two people photographed an oil sheen that day, one at the marina and one at 7831 Southdown Road, almost a mile south of Dyke Marsh.  Tri-State staffers said they were called on February 4 and that they and others caught birds for a week at Roaches Run, Hains Point and Gravelly Point.

Spring is underway in Dyke Marsh, especially in the “bird world.”  Former FODM President Ed Eder has taken these beautiful photographs and made a video of some recent bird sightings in Dyke Marsh.

Two barred owls (Strix varia) have been seen near the Haul Road.  Here is one flying through a sweet gum tree.

On the morning of January 18, 2016, the annual Martin Luther King Day of Service and winter’s coldest day so far, 20 hardy volunteers organized by the Northern Virginia Conservation Trust (NVCT) visited the Dyke Marsh Wildlife Preserve.   Braving temperatures in the high teens and a brisk wind whipping across the river, the group removed English ivy climbing up trees and collected five bags and a plastic crate of trash.

In September 2015, a team from the North Carolina Botanical Garden, working with National Park Service staff and the Friends of Dyke Marsh, collected thousands of pumpkin ash seeds (by the bunch, pictured) from a score of different trees in the preserve.  The team has concluded that the seeds are likely viable and in early 2016, they are drying them for long-term storage.

Among many other accomplishments, Henry David Thoreau and Thomas Jefferson were diligent phenologists.  They kept detailed journals in which they recorded the timing of events in nature -- when trees leafed out, when flowers bloomed, when the ground was warm enough to plant.