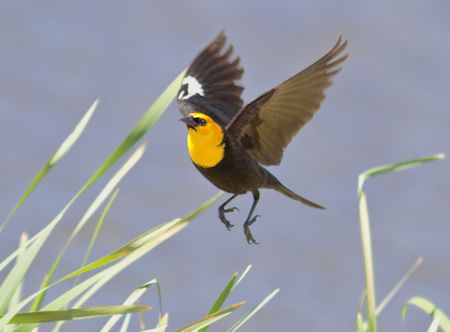 The males have a loud harmonic song that is diagnostic, which they use to defend territories. “It may have the worst song of any North American bird, a hoarse, harsh scraping,” says Kenn Kaufman in the Lives of North American Birds. The bird at Dyke Marsh has been vocalizing intermittently. Vagrant yellow-headed blackbirds occasionally appear in Northern Virginia in the late fall through winter. The last known one close to Dyke Marsh was near Veterans Park in Woodbridge.   The online range map for this bird on Cornell University’s All about Birds does not show them in Virginia in any season. Visit the website here.