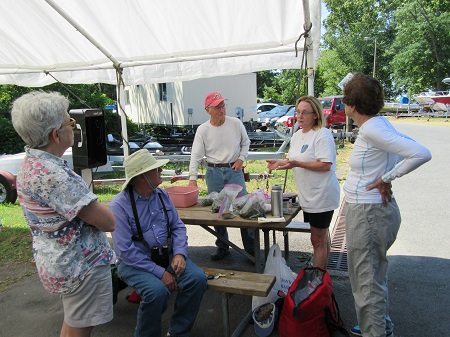 Several FODMers learned about native and non-native submerged aquatic vegetation (SAV) of Dyke Marsh and the Potomac River on July 14, 2018, when Nancy Rybicki gave a tutorial and led a paddle.  Dr. Rybicki is an aquatic plant ecologist and wetlands scientist, retired from the U.S. Geological Survey.  In her 37 years of studying the vegetation of the Potomac River, she has correlated the presence of submerged aquatic vegetation with water quality.

The SAV in the Dyke Marsh-Alexandria area is behind this year, probably because of turbid water, but it is starting to be visible after several months of many rainy days.

At least 11 native species of SAV have been identified in the tidal Potomac River, according to Dr. Rybicki.  SAV provides habitat and food for fish, copepods and other fauna.

Photos contributed by Glenda Booth except as noted.