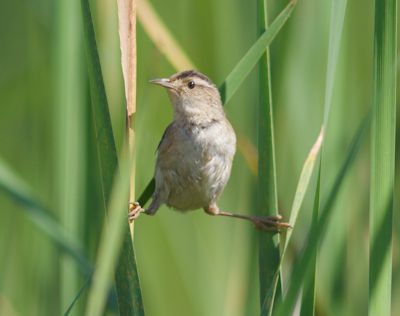 This marsh wren was photographed in Dyke Marsh on June 27, 2017. Photo by Ed Eder

This year, 2017, there seem to be more marsh wrens (Cistothorus palustris) occupying the Dyke Marsh Wildlife Preserve than at any time since 2014 when FODMers last recorded this bird as a breeder.  Data from volunteers this year suggest there may be as many as five territorial males in the marsh.  This does not necessarily mean the population is recovering.  Avian males appear more willing to occupy degraded or marginal habitats than females and, sadly, we have had no reports of females alone or as part of a breeding pair in Dyke Marsh since 2014.

According to some experts, the disappearance of the breeding population of marsh wrens in Dyke Marsh is likely tied to a larger regional decline, perhaps extending to the coast, but the restoration of this valuable wetland could provide another important location in any hoped-for recovery.

In Louise Halle’s 1947 book, Spring in Washington, he wrote:  “We heard the wrens this morning before there was light to see them.  All over the marshes we heard them singing in a steady chorus, each song a gurgling chatter, brief but repeated with hardly time for breath between.  When it became light enough, we saw the singing wrens as far as the eye could reach over the marshes, carried upward on fluttering wings above the grass tops by the very exuberance of their song, and sinking back again.  The dots were bobbing up and down everywhere, like a natural effervescence given off by the marsh.”

In her 2000 master’s thesis, Sandra Spencer offered this observation:  “Protection of the remaining habitat from reduction or degradation due to expansion of invasive plants and erosion and restoration of lost habitat are strongly recommended to ensure persistence of this population over the long term.”  FODMers hope that the National Park Service will start the restoration soon.  See our restoration page for the history and current status.