The Results of the 2019 Dyke Marsh Breeding Bird Survey

Volunteers conducted the 2019 Dyke Marsh Breeding Bird Survey between May 25 and  July 4, but any data collected outside of this period that confirmed a breeding species was entered into the database. This permitted us to filter out most migrants that do not use the marsh or surrounding habitat to breed. I also included information provided from the Sunday morning walks and reliable individuals to supplement data reported by the survey teams. The survey tract encompasses the Belle Haven picnic area, the marina, the open marsh, that portion of the Big Gut known as West Dyke Marsh that extends from the George Washington Memorial Parkway west to River Towers, the Potomac River from the shoreline to the channel, and the surrounding woodland from the mouth of Hunting Creek to south of Morningside Lane.

The breeding bird survey methodology uses behavioral criteria to determine the breeding status of each species found in the survey tract. Species are placed into one of four categories: confirmed breeder, probable breeder, possible breeder, and present. We identified 71 species at Dyke Marsh during 2019. There were 40 confirmed breeding species, 10 probable breeders, and 13 possible breeders. An additional 8 species were listed as present, but either were colonial breeding waterbird species not using a rookery inside the survey tract, species in unsuitable habitat for breeding, or migrants still transiting northern Virginia to breeding areas further north. 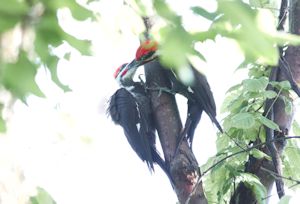 Adult pileated woodpecker feeding fledged young. Photo by Ed EderThe 2019 survey revealed some noticeable changes in songbird presence and distribution. Some species like great crested flycatcher (Myiarchus crinitus), eastern kingbird (Tyrannus tyrannus), and orchard oriole (Icterus spurius) were found in their usual abundance and all bred at Dyke Marsh Wildlife Preserve. However, for the first time since I became compiler in 1994, yellow warblers (Setophaga petechia) and Baltimore orioles (Icterus galbula) were not confirmed as breeders. Although volunteers discovered four or five territorial Baltimore oriole males and even a male-female pair, we found no evidence of breeding. Yellow warbler males did not even attempt to establish territory. Song sparrows (Melospiza melodia), often confirmed as breeders in past years, were also absent.

Warbling vireos (Vireo gilvus) were confirmed as breeders in 2019 and although numbers were robust around Haul Road and the Belle Haven picnic area, the density in the south marsh was dramatically diminished. Although we could easily find up to nine warbling vireos in the picnic area and Haul Road during a morning outing, it was extremely difficult to document more than two singing males while conducting a survey from the Big Gut Bridge and Tulane Drive south to Morningside Lane.

The results of the 2019 survey also indicated a drop in the number of songbird young that fledged, including the more common species like eastern kingbird and orchard oriole, where we found numerous nests of both species, but fewer than expected family groups. We found no warbling vireo nests or fledged young in 2019. Our confirmation of this species consisted of an adult carrying food to an unlocated nest. 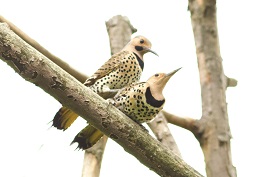 Northern flickers copulating. Photo by Ed EderThere are several possibilities as to what happened during the 2019 breeding season. We have discussed the possible effect of unsettled weather and a warming climate, a reported drop in the insect and other arthropod prey base, the death of numerous pumpkin ash trees and the likelihood that 2019 was just an off year. It may be a combination of events occurring simultaneously. The death of pumpkin ash trees has opened many areas that used to produce canopy cover that may have concealed many songbird nests from predators. I received one report in 2019 of fish crows attacking and consuming eastern kingbird nestlings along the boardwalk at the end of Haul Road. Perhaps predation is becoming a more frequent event.

Volunteer surveyors always play close attention to two prominent birds that occupy the open marsh, the marsh wren (Cistothorus palustris) and the least bittern (Ixobrychus exilis). We have found only one active marsh wren nest since 2014. Despite the lack of breeding attempts, at least a few marsh wren males occupied the marsh, even if only briefly, since 2015. The 2019 survey recorded no marsh wrens at Dyke Marsh, the first time this has happened in my tenure as compiler.

The status of the least bittern seems more precarious than ever. One caveat is that we conducted only two canoe routes in the south marsh in 2019, but canoe teams covered the marsh around the Haul Road, Little Gut, and the western edge of the marsh south of the Little Gut to Bird Island almost weekly. These canoe teams plus a land-based team yielded only two reports in early June of a least bittern in one of the tributaries of the Little Gut. The two southern canoe teams conducted their surveys in late June. Each of these teams reported one bird, both in the upper portion of the Big Gut, but at separate locations. That is the total sum of least bittern reports for 2019. 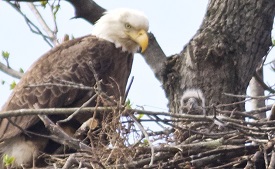 Bald eagle nest on Haul Road with one adult and one of two nestlings. Photo by Ed EderThe Haul Road nesting bald eagles (Haliaeetus leucocephalus) were successful in the second season of this nest's existence. The novice breeding pair fledged one young bird in 2018; this year they doubled that effort with two youngsters fledging by early June. The Morningside Lane breeding pair produced at least one fledged young, but we found no fledged birds that could be associated with the Tulane Drive nest.

Ospreys (Pandion haliaetus) built eleven nests in 2019. A nest on Bird Island was destroyed by Memorial Day weekend apparently when part of the tree supporting it broke off and a second nest built on a huge stump in the Potomac River near Porto Vecchio met a similar fate when it was washed away. Of the remaining nine nests, only half produced nestlings and fledged young. Successful nests tended to be closer to or along the shoreline while unsuccessful nests were further out in the river on pilings or other artificial structures. I have no ready explanation or theory as to why this would be the case. I initially toyed with the idea that something may have impacted the fish prey base in the open river, but there is no tangible evidence to prove that.

Finally, and much to my surprise, we added four first-time confirmed breeders to the Dyke Marsh list, consisting of one waterfowl species, two hawks, and a songbird. In April, one of our volunteers who resides at River Towers, spotted a hooded merganser (Lophodytes cucullatus) hen with eight recently hatched young in West Dyke Marsh. The actions of a red-shouldered hawk (Buteo lineatus) pair courting and copulating in West Dyke Marsh throughout March culminated in the fledging of at least one youngster in July. Eastern bluebirds (Sialia sialus) bred in a cavity in an open park-like wooded area adjacent to the marsh in West Dyke Marsh. We observed a fledged youngster by late June. Finally, although the effort was abandoned, a nest building Cooper’s hawk (Accipiter cooperii) was documented along Haul Road in mid-April.

Confirmed Breeder: Any species for which there is at minimum evidence of a nest. A species need not successfully fledge young to be placed in the confirmed category.

Probable Breeder: Any species engaged in pre-nesting activity, such as a male on territory, courtship behavior, or even the presence of a pair, but for which there is no evidence of a nest. Since birds can and do sing and display to females during migration, this category cannot be used until the safe dates are reached.

Possible Breeder: Any species, male or female, observed in suitable habitat, but giving no hard evidence of breeding. Unless actively breeding, all birds in suitable habitat before the start of the safe date are placed in this category.

Present: Any species observed that is not in suitable habitat or out of its breeding range. It also applies to colonial water birds in the survey tract not associated with a rookery in the tract.

Definition of Safe Dates: We use safe dates as a means of deciding if a bird can be considered a breeder or a migrant. Safe dates are simply defined as a period of time beginning when all members of a given species have ceased to migrate in the spring and ending when they begin to migrate in the fall. Unless a bird is engaged in behavior that confirms breeding, it will be placed no higher than in the possible breeder category if it is observed outside the safe dates assigned to that species.