Ospreys Are Resourceful, but Fishing Line Is a Danger 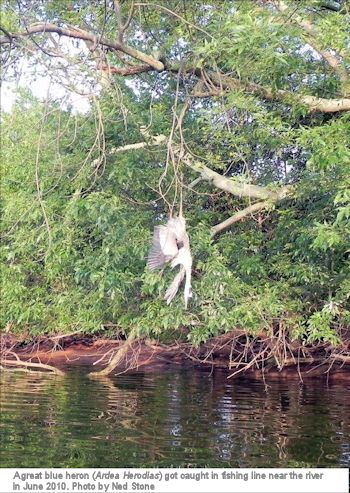 Every spring, FODMers welcome the spring return of the ospreys (Pandion haliaetus) to Dyke Marsh and the Potomac River shoreline where these magnificent raptors build and refurbish their nests and raise their young.   In recent years, there have been approximately 10 to 12 active osprey nests within FODM’s breeding bird survey tract, a three-mile area that extends from the Porto Vecchio condominiums near Hunting Creek to south of Morningside Lane.

Despite the rebound in the osprey population, threats still exist.

In September 2016, an osprey was impaled by fishing line in Dyke Marsh and died snagged in a tree along the Potomac shoreline. On April 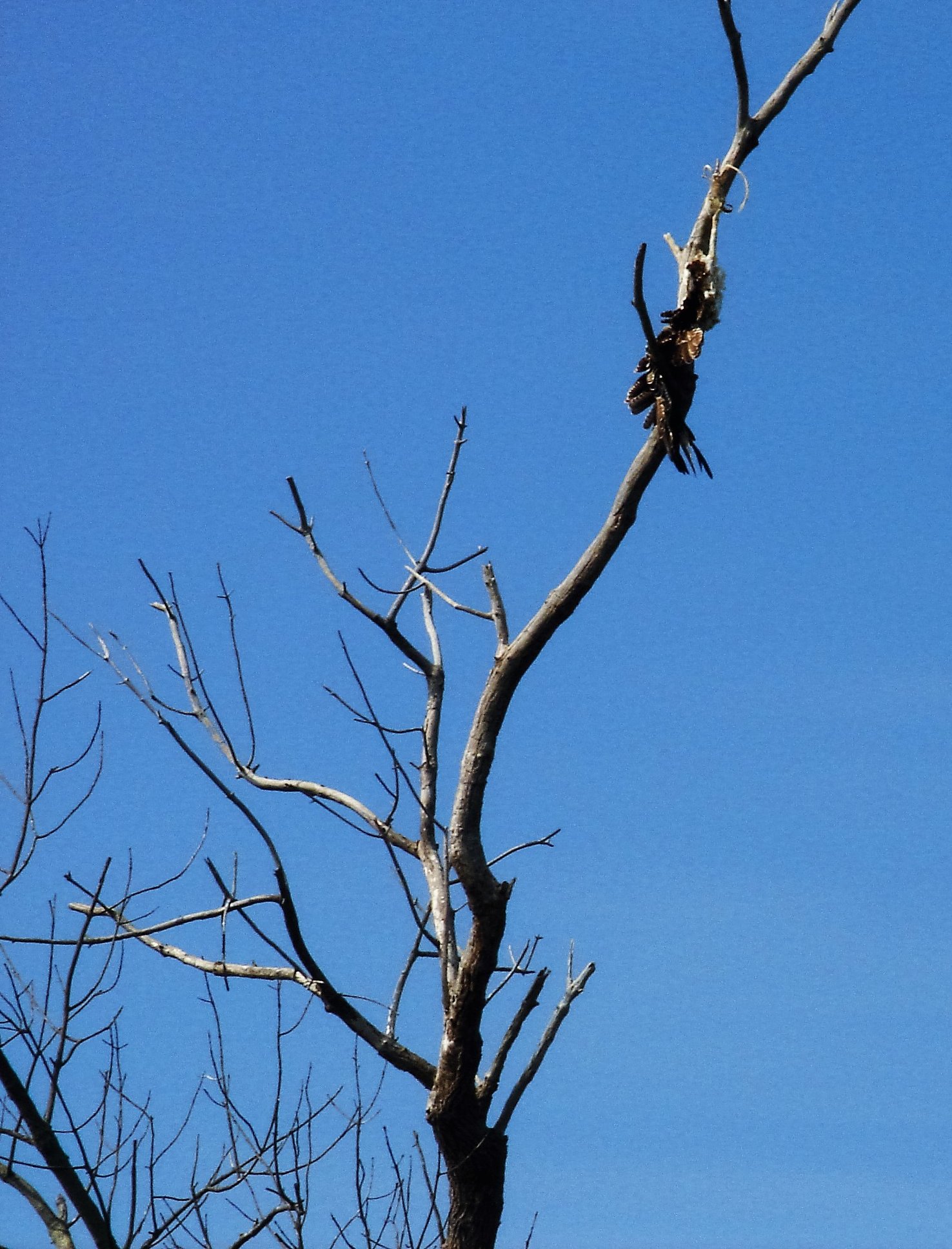 Osprey in fishing line at Dyke Marsh. Photo by Glenda Booth18, 2016, FODMer Eldon Boes, a Porto Vecchio resident, reported that the female osprey using the nesting platform on condo property had died after she entangled her primary flight feathers in fishing line.  Eldon removed the fishing line from the nest.

After the demise of the female, the male Porto Vecchio osprey apparently soldiered on.  FODM Breeding Bird Coordinator Larry Cartwright wrote, “At first it seemed that the nest was doomed to failure, but within 30 hours of the tragedy, the male apparently secured another female to tend the nest.  It is rather odd that an unmated female would readily adopt a nest and incubate eggs that are not her own.  It is possible that the new female will lay a replacement clutch.  The original female was extremely prolific as the average osprey clutch consists of three eggs, while she was documented laying four eggs during several breeding seasons.  In 2014, the Porto Vecchio breeding pair hatched all four eggs and fledged all four nestlings, a new Dyke Marsh breeding bird survey record for osprey breeding success! 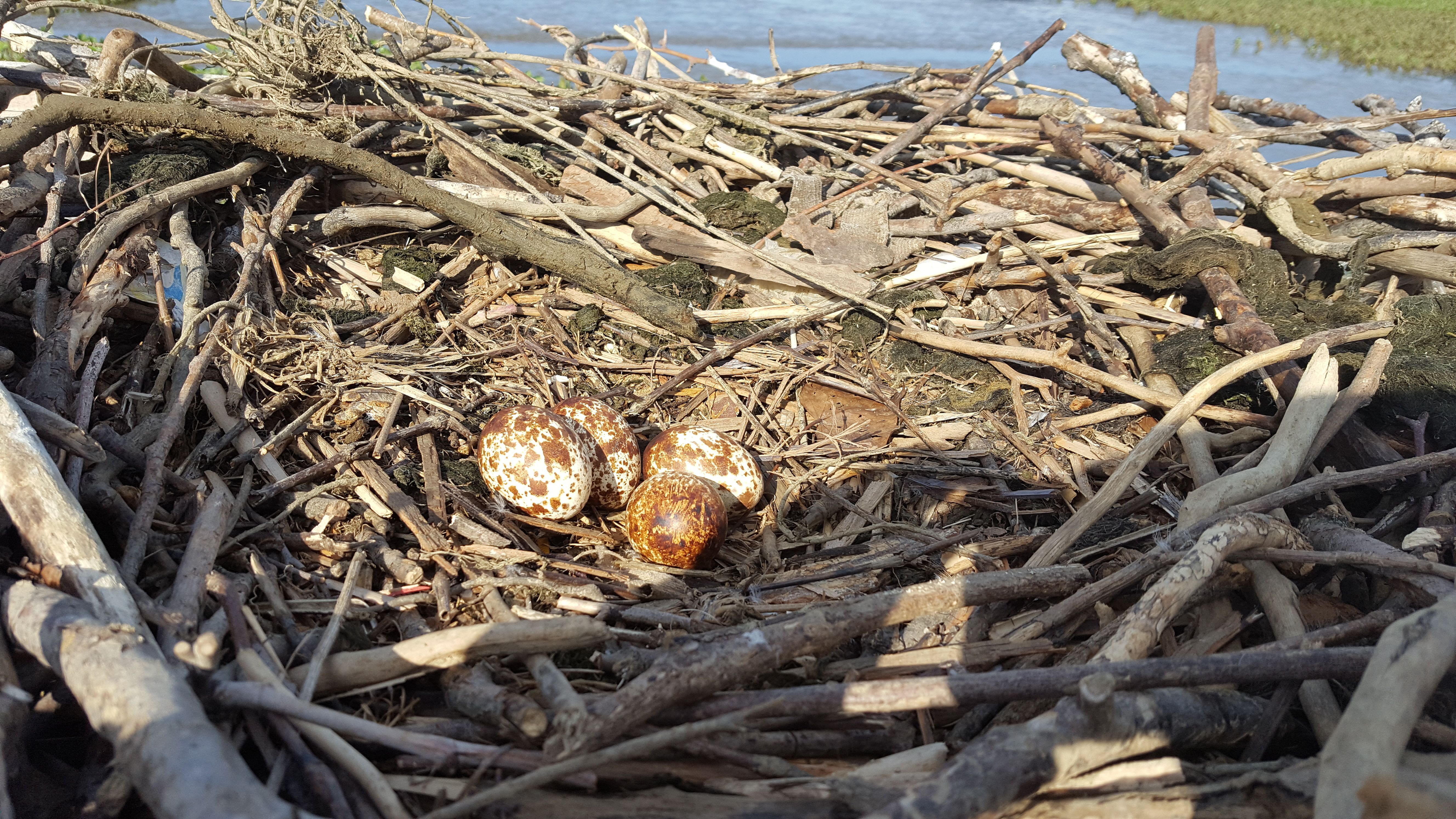 Osprey eggs in the Porto Vecchio nest, April 23, 2016. Credit: Eldon Boes.“Ospreys are a highly visible and an extremely successful species in and near the Dyke Marsh Wildlife Preserve.   Although an occasional osprey fails to produce young or abandons the nest, most ospreys succeed in fledging at least one youngster.  Ospreys have used standing trees, root balls of fallen-over trees, nesting platforms and even a sailboat to support nests and raise youngsters. 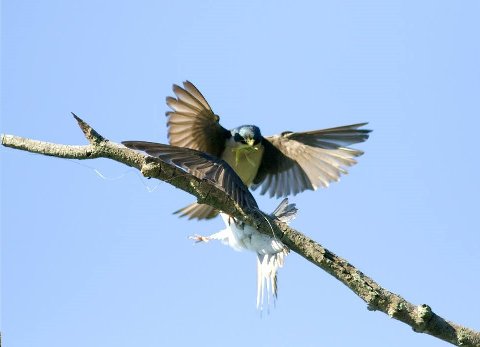 These birds are known to take all kinds of non-natural materials, essentially trash, to their nests like netting, plastic bags, balloons, ropes and cup lids. They are quite remarkable birds and we should do our best to protect them by picking up abandoned fishing line, plastic material, deflated helium balloons and other debris.”

In June 2016, Ed Eder photographed (above left) a tree swallow (Tachycineta bicolor) in Dyke Marsh with its feet entangled in fishing line which, as Ed posted on Facebook.com, “upset the delicate balance of food delivery.” 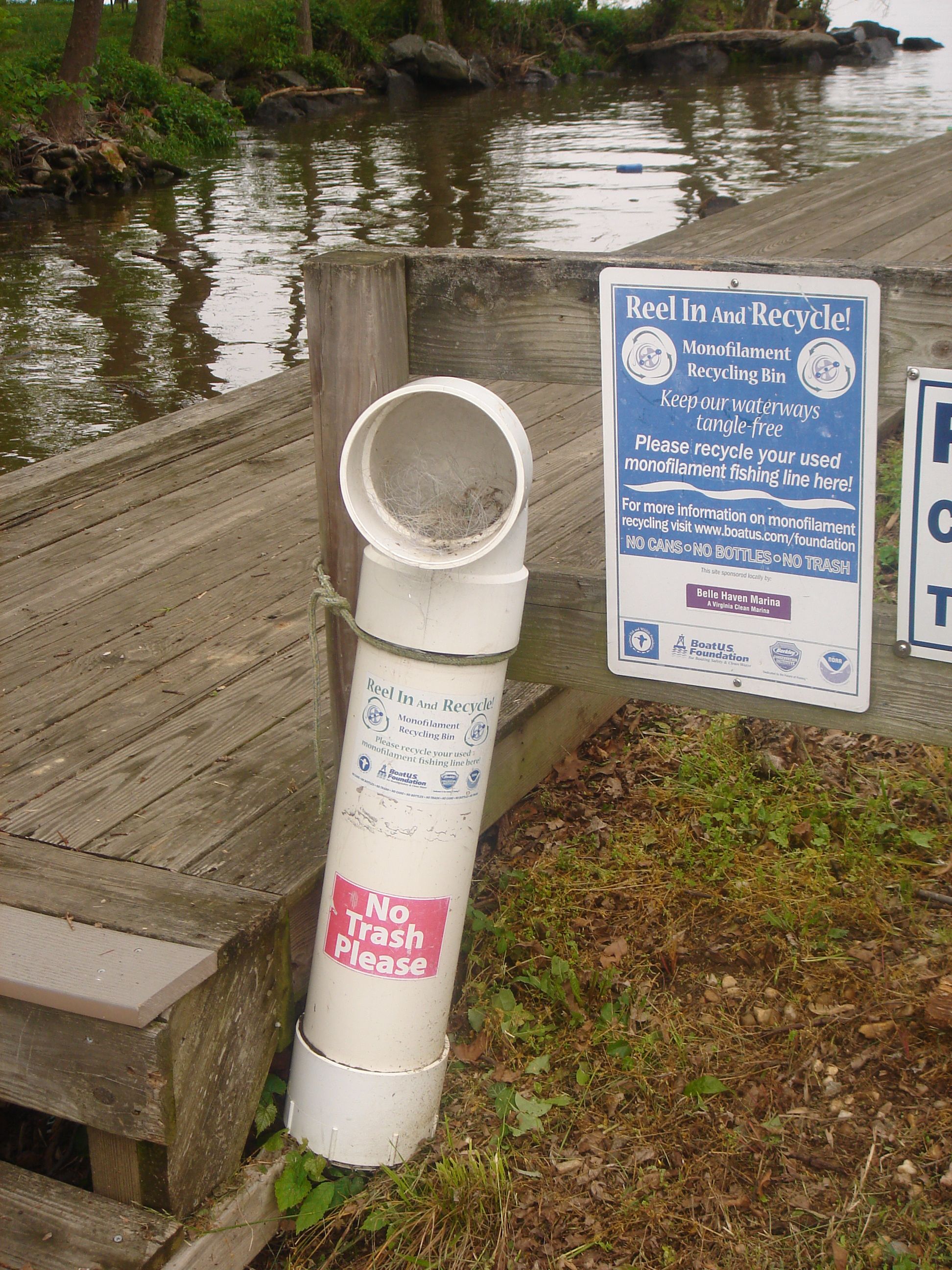 Fortunately, the Belle Haven Marina has a fishing line disposal container (photo, right).  Many people in the fishing community use it.

“We urge all anglers to retrieve fishing line that becomes caught in branches or rocks to avoid the potential for fish and wildlife entanglements. Also, we urge all anglers to collect even the smallest pieces of line (like the little tags are clipped off near the hook) to avoid any unnecessary messes or pollution. In addition, we ask anglers on the stream to pitch in and clean up after those who failed to do so. Often, lines fall from vests or tackle boxes and we ask all anglers to collect these lines to avoid having them get caught around fish, animals or other anglers.

“The bottom line is, as anglers, we owe it to those who come after us to pack out what we pack in, and be Good Samaritans of the resource by demonstrating by example what it means to a true angler. That means you're as much a conservationist as you are a fisherman. Unless we nurture our fisheries and keep them clean, we're not leaving behind the same opportunities for the next generation of anglers who will hopefully follow in our footsteps.”