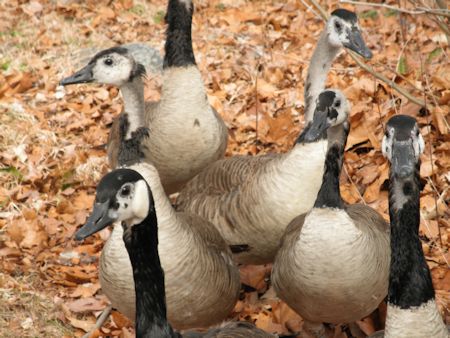 On February 22 at Belle Haven Park, several members of the Friends of Dyke Marsh attended and helped release 21 Canada geese that had been oiled and cleaned by staff of Tri-State Bird Rescue and Research of Newark, Delaware.

FODMers and others reported to local, state and federal authorities on February 3 that an oil sheen was in the water at the Belle Haven Marina.  Two people photographed an oil sheen that day, one at the marina and one at 7831 Southdown Road, almost a mile south of Dyke Marsh.  Tri-State staffers said they were called on February 4 and that they and others caught birds for a week at Roaches Run, Hains Point and Gravelly Point.

On February 12, Dominion Power accepted responsibility for the spill, saying it was mineral oil from a transformer station in Crystal City, that a spill occurred on January 24 and that the company will “work with the agencies to ensure the remaining cleanup work is done.” 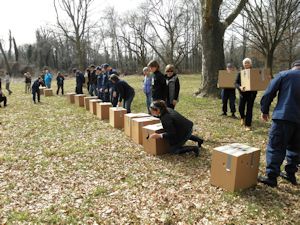 People from several agencies and organizations carried the geese in cardboard boxes to the shoreline. Photo by Glenda BoothTri-State released 21 Canada geese on February 22.  Tri-State staff said that they caught 37 Canada geese and mallards, that the birds had mineral oil and dirt on their feathers and in an effort to clean it off, some of the birds had feather loss and skin irritation.  Some birds could fly and walk.  Washington, D.C.-based City Wildlife transported the birds to Tri-State’s facility.  There, staff examined the birds, cleaned them and banded them with a silver, U.S. Fish and Wildlife Service band.  On February 20, Tri-State veterinarians examined the birds and determined if they were healthy enough to be released.  The released geese can eat on their own, Tri-State officials said.

At least 29 birds and fish died, according to a February 19 Virginia Department of Environmental Quality news release.  Tri-State still has some birds that are not ready for release. 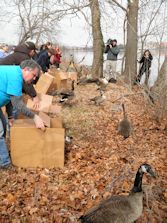 Everyone opened the cardboard boxes to release the geese. Photo by Glenda BoothOn February 22, Tri-State brought the birds from Delaware to the park in taped cardboard boxes.  People from the U.S. Coast Guard, National Park Service (NPS),  U.S. Fish and Wildlife Service, Tri-State, City Wildlife, FODM and others carried the boxes from the vans to the Potomac River shoreline and opened the boxes for the birds to exit.  At first, the birds seemed stunned and they ambled around in the grass for a few minutes.  Then soon, they flew away toward the river and some landed in the river, home at last.

Michelle Neef, Oil Programs Coordinator, said that her organization likes to release rehabilitated birds close to where they were found. She said that Canada geese want to be with their partners and that they will follow their leader.

If you see a Canada goose with a silver U.S. Fish and Wildlife Service band, you can report it to the North American Bird Banding Program, U.S. Geological Survey, at https://www.pwrc.usgs.gov/bbl/bblretrv/index.cfm.   Tri-State has provided these numbers on the bands of the birds released at Belle Haven Park that day.

On February 19, after completing their investigation, the U.S. Coast Guard turned over remediation to the Virginia Department of Environmental Quality (DEQ).  DEQ reported the following on February 19: 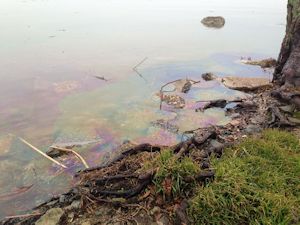 Several FODMers spotted this sheen along the shoreline of the Belle Haven Marina.“A transformer failure at the substation, located at 18th Street South and South Fern Street, released approximately 13,500 gallons of mineral oil.

“After the transformer failure, DEQ received reports of an oil sheen on February 3, 2016, extending from stormwater outfall locations at Roaches Run to downstream shoreline areas along the Potomac River reaching as far south as the Woodrow Wilson Bridge. The source of the oil sheen was traced back to mineral oil released from the Crystal City substation on January 24. Dominion announced on February 12 that it is assuming the role of ‘responsible party’ for the release and will continue to cooperate with ongoing requirements for investigation and corrective action.

“DEQ's notice of violation addresses the spill event and associated natural resource damage. In addition to impacts to state waters, 29 animal and fish deaths have been discovered. The notice of violation is an initial step in ensuring that Dominion is held accountable for the situation. The State Water Control Law provides authority to require corrective action and to assess civil penalties. In addition, DEQ plans to seek cost reimbursement for spill response activities and natural resource damage.

“As of February 19, oversight of the spill event has been transferred to DEQ by the unified command (Virginia DEQ, the District of Columbia Department of Energy and Environment, and the U.S. Coast Guard). DEQ will continue to oversee the spill investigation and response, and it will monitor corrective action activities required of Dominion.”

Dominion told several state legislators that the company paid $4.2 million for “response, remediation and restoration in Arlington” incurred by various entities.  As of January 4, 2017, we await a report on natural resource damages, the costs and how Dominion will respond.  It is unclear whether (1) there was any damage in Dyke Marsh and (2) if so, how it was determined.  DEQ officials emailed, “Although initial reports of the spill indicated the sheen reached the Wilson Bridge, sheening from the spill event may have also occurred further downstream.  There may also be smaller sources (e.g. marinas, boat traffic, outfalls, etc.) that contribute to sheening in the area.  Ongoing investigation and assessment of the spill will attempt to characterize the nature and extent of the spill for natural resource damage.”

FODM worked to get the facts on the spill and its impacts.  We urged NPS to assess the damage to their natural and other resources. We filed comments on DEQ’s proposed consent order with DEQ and the State (Virginia) Water Control Board.  On December 12, the State Water Control Board approved a consent order. Among other things, it imposes a civil charge on Dominion Power of $259,535 and requires the company to reimburse DEQ $5,882.80 for investigative costs.  On December 28, Dominion agreed to pay Washington, D.C., a $75,000 fine.

FODM thanks Virginia Senators Adam Ebbin and Scott Surovell and Delegates Paul Krizek and Mark Levine for their help in ascertaining the facts and helping make DEQ and Dominion accountable.

On February 22, Alex Romero, NPS George Washington Parkway Superintendent, emailed FODM that NPS helped rescue oiled birds at Roaches Run, Gravelly Point, Hains Point, Constitution Gardens and by the 14th Street Bridge. He wrote that NPS officials have no reports of oiled birds in Dyke Marsh.  NPS and others are working to assess the damage to natural resources, he wrote.