The DAR Helps in Dyke Marsh 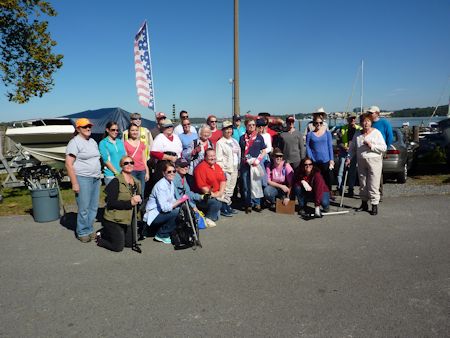 On October 11, 2015, 29 members of the Nelly Custis Chapter and other chapters of the Daughters of the American Revolution (DAR) turned out in force to help in the Dyke Marsh Wildlife Preserve (photo left by Robert Smith). Under FODM Vice-President Ned Stone's direction, they split into three groups and cleaned the shoreline of an island and the Belle Haven picnic area and took on invasive plants on the dogleg portion of the Haul Road trail.   The eager group collected around 58 bags of trash.  "It makes a difference," wrote FODM Treasurer Robert Smith.

"The enthusiasm was just palpable," Ned said.  "We were faced with a badly-trashed island and a badly-trashed picnic area shoreline, as well as a marsh trail severely impaired by invasive plants. We made huge inroads on all those nasties.  Everything looks much better and I am SO gratified."