Sora Heard in the Marsh 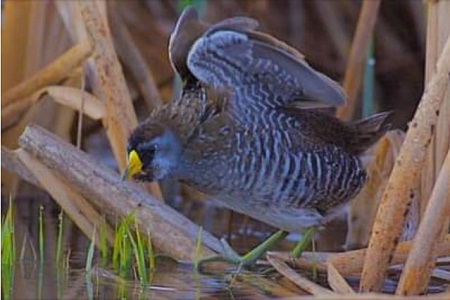 The sora is a rare encounter in Dyke Marsh. Photo by Ed Eder

The sora (Porzana Carolina) is the most abundant and widely distributed species of marsh-loving birds called rails (family Rallidae) in North America.  In the 1960s, they were frequently seen in migration at Dyke Marsh, according to surveys conducted by Jackson Abbott.

Today, they are rarely encountered, so it was a rare treat when people heard at least five in the marsh in the early morning hours of October 18, 2020.  “The sora makes its presence known with plaintive whistles and whinnies,” wrote Kenn Kaufman in Lives of North American Birds.  This rail is mottled brown and gray with white-edged feathers, around eight to ten inches in length, two to four ounces in weight, has a bright yellow “candy corn”  bill and nervously flicks its tail.

Soras consume wetland plant seeds and invertebrates and wild rice is a favorite during summer and fall.  Wild rice is found at Dyke Marsh and maybe partly explains why the birds made a stop here along their migration journey.

“Seeing these rails is a challenge,” wrote FODMer Ed Eder, “since they lurk in damp marsh vegetation. The best chance to see them is during extreme high tide, early in the morning or near dusk.”  Thanks to Ed for this beautiful photo of a sora that he took in Dyke Marsh several years ago.