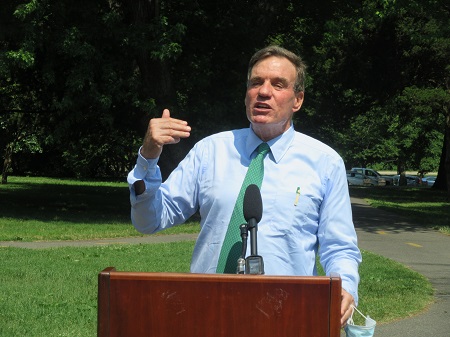 Senator Warner, a lead sponsor of the bill, said that the Senate passed the bill on a bipartisan 73-25 vote.  He called on the House of Representatives to send it to President Donald Trump before the nation’s birthday, July 4th.

Senator Warner noted that 900 organizations endorsed the bill and it will provide 100,000 jobs in the country, 10,000 in Virginia.

He was joined by former National Park Service Director Robert Stanton who said that our “national parks are one system, an expression of a single, national heritage for all Americans.”

The Zebra newspaper was one of several media outlets that covered the event:  https://thezebra.org/2020/06/22/warner-speaks-in-belle-haven-to-mark-senate-passage-of-va-parks-bill/

The Mount Vernon Gazette published this article on June 25.