The Songs of Insects 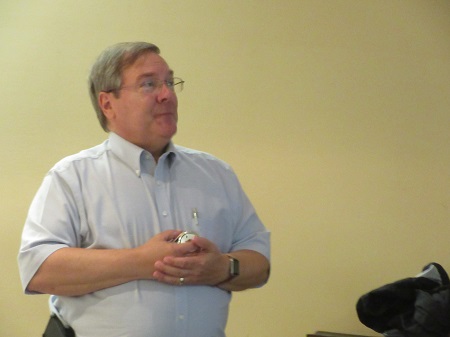 Wil Hershberger explained how and why insects sing.

Fall brings a “special orchestra” to the out-of-doors, began Wil Hershberger, at the September 11, 2019, meeting of the Friends of Dyke Marsh, at which Hershberger explored the songs and singing of crickets, katydids, grasshoppers (Orthoptera) and cicadas.  In late summer and early fall, these singing insects fill the air with their courtship choruses.

He said that some insects make sounds with an ancient instrument called a “file” and a “scraper.” These stridulations vibrate membranes in the wings that amplify the sound.  Grasshoppers sing lesser songs by rubbing their hind legs on their wings. Male cicadas make sounds with their tymbal organ and females of some species respond with wing flicks.  Crickets’ chirp by rubbing their wings together using the file and scraper method.  Most insect sounds are mating calls used to attract a female. He played the sounds of each insect he described.  Some sounds are like a little tinkling bell; others, like the common meadow katydid, may sound like a lawn sprinkler to humans.

“Many species of these singing insects have personalities,” he explained, offering as an example, false katydids that are “slow and meticulous.”  Most katydids are brown or green, to avoid predation, he commented. Crickets that live in or on the ground are dark brown or black to more easily hide in a cavity or burrow.

A West Virginian, Hershberger is the co-author of The Songs of Insects, and with his wife, Donna, formed Nature Images and Sounds, LLC.  His exquisite photos, recordings and range maps for 90 species of singing insects can be found at www.SongsofInsects.com. He has over 3,000 recordings in the Macaulay Library of Natural Sounds at Cornell University’s Laboratory of Ornithology.

The Potowmack Chapter of the Virginia Native Plant Society cosponsored the meeting.