FODMers Investigate the Habitat Quality of a Stream 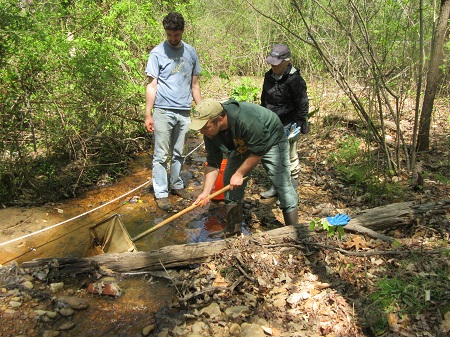 On a sunny April 16, 2019, for the third year, four FODMers helped conduct habitat quality testing in an unnamed stream flowing through Mount Vernon Park into west Dyke Marsh. This effort was led by Dan Schwartz, Ashley Palmer and Ben Rhoades of the Northern Virginia Soil and Water Conservation District (NVSWCD). 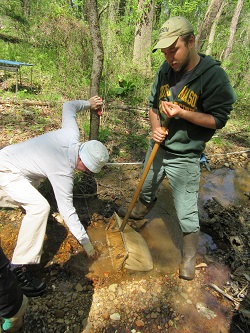 Don Barnes stirred up sediments to nudge macroinvertebrates into the scooping net.In approximately 90 minutes in the early afternoon, the group took 20 samples from the stream within a 300-foot span, with the goal of identifying 100 living benthic macroinvertebrates. They found 27 of these species: caddisfly, dragonfly, aquatic worm, most true fly, midge, scud and sow bug. The type of invertebrates in a stream is one indicator of stream quality. Some species are tolerant of degraded environments and others are very sensitive. Most streams in Fairfax County are impaired. NVSWCD uses a scoring system that rates ecological condition is as follows: >14, acceptable; 8 to 14, partially acceptable; <8, unacceptable. On April 16, the stream received a score of 18, but the NVSWCD staff urged caution in analyzing the score for several reasons. The sample of macroinvertebrates collected was quite small and factors like expertise and time of year can affect outcomes. In 2018, the stream received a score of 9 and in 2016, the score was 6.