How Plants Support Insects, Birds and other Wildlife 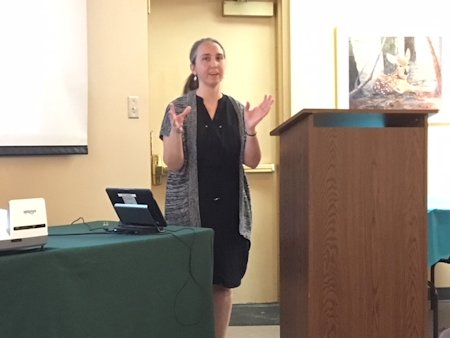 Dr. Desiree Narango, an ecologist, gave a presentation to 70 people on September 12, 2018, explaining how native and non-native plants affect breeding bird populations, behavior and food web interactions. She worked with the Smithsonian Institution's Neighborhood Nestwatch program which focuses on breeding birds in urban/suburban backyards.  Like most songbirds, Carolina chickadees are very dependent on caterpillars and other insects when raising their young.  A chickadee with four to seven young, needs between 390 to 570 caterpillars every day to feed their young.  Caterpillars are very dependent on certain host plants.

Here are some points that she made: 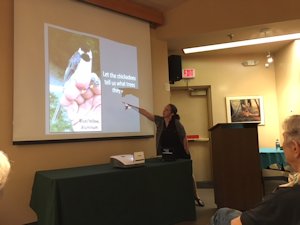 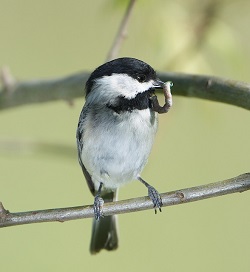 Native plants provide food for many birds like Carolina chickadees. Photo by Doug TallamyShe challenged attendees, saying, "Your yard can have profound implications on the songbirds and other wildlife that use urban and sububan areas.”  This photo of a chickadee with a caterpillar is by University of Delaware entomologist Dr. Doug Tallamy, with whom Dr. Narango studied and still works.  She is now at the University of Massachusetts, Amherst.