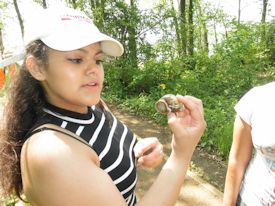 Thirty youngsters from Washington, D.C., Inspiring Connections, all students at Caesar Chavez Public Charter School for Public Policy and their three D.C. Sierra Club chaperones, learned all about freshwater wetlands and the flora and fauna of the Dyke Marsh Wildlife Preserve on April 29.

FODMers Glenda Booth and Ned Stone and NPS naturalist Mireya Pasa led a nature walk along the Haul Road to the boardwalk.  NPS ranger Kelly Clark led a kayak tour on the river.  Among other sightings, spotting several skinks were highlights of the walk.

All photos for this article were contributed by Glenda Booth.