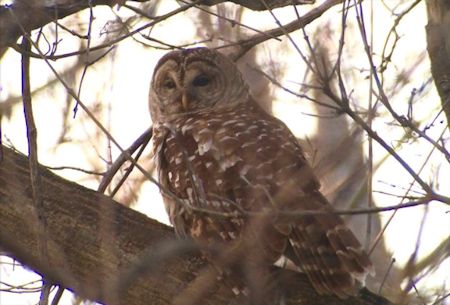 FODM surveyors believe that a barred owl (Strix varia) pair has set up a breeding territory near the Belle Haven Park picnic area this spring (2017).  According to FODMer Larry Cartwright, barred owls select a breeding territory based on suitability for nest sites and prey base, partly to monopolize food sources and partly to prevent another male from attempting to break the pair bond.

Territory size may vary depending on factors like the concentration of food sources. A heavily-concentrated prey base allows for smaller territories and more dispersed food sources require a bigger area.

Owls typically vocalize at night to announce that they have a claim to an area and to preclude other owls from entering the territory.  Often the vocalization is sufficient, but if another owl trespasses, the territory holder will chase the “intruder.”  Resident owls may keep their territory year round.  We believe this pair has. If an owl invades another territory, the male or the pair will chase the intruder.

This year’s pair or another breeding pair fledged young at Dyke Marsh in 2015, but may not have been successful the following year.  Volunteers have also confirmed two additional owl species as breeders in past surveys, the great horned owl (Bubo virginianus) and the Eastern screech-owl (Megascops asio).

The photo shows one of two barred owls perching close to the Dyke Marsh entrance near where they begin hunting at dusk (photo by Ed Eder).