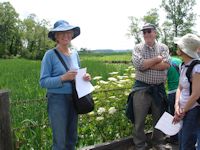 Dr. Elizabeth Wells leads plant walks in Dyke Marsh. Photo by Glenda Booth.The Friends of Dyke Marsh (FODM) was formed in 1975 by a group of local people who, initially, wanted to stop plans to use the marsh as a dumping ground for dredged river spoil. This was yet another insult to the wetland; in the 1930s, construction debris had been heaped into the marsh and some of it is still visible today. The group formally organized as a non-profit organization for the purpose of cooperating with the U.S. National Park Service (NPS) in promoting the well-being of the marsh and preserving and restoring it. FODM was incorporated in 1976.

Since 1975, the Friends have continued and expanded their volunteer work. Our efforts include holding quarterly meetings and other programs open to the public; publishing a newsletter titled The Marsh Wren; raising money to sponsor scientific studies of the marsh; conducting nature walks; conducting surveys, including the annual breeding bird survey; hosting trash cleanups; preparing informational materials; encouraging public stewardship; maintaining this website and a Facebook page; and helping NPS control invasive 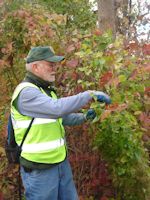 Lew Cabe is a member of the FODM team that works to control non-native, invasive plants. Photo by Glenda Booth.plants.

The Friends also advocate for conservation and restoration and oppose inappropriate activities that degrade the health of the marsh as a wildlife habitat. For a more complete history of the park and the Friends of Dyke Marsh, see Dyke Marsh Wildlife Preserve, A Chronology.

The Friends of Dyke Marsh is dedicated to preserving, protecting and restoring the Dyke Marsh Wildlife Preserve, in cooperation with the National Park Service, as a vital wildlife habitat, through education, science and stewardship. Our vision is that Dyke Marsh is once again a healthy, vital, self-sustaining, biodiverse ecosystem.

Thanks go to our many supporters, including many public officials.

Some Examples of What We Do

Caroline Seitz of Reptiles Alive used live reptiles in her presentation to FODMers. This alligator is not found in Dyke Marsh.

FODM supported a dragonfly and damselfly survey in the preserve, conducted by Chris Hobson of the Virginia Natural Heritage Program, which he presented at a FODM meeting in 2012.

FODMers conduct surveys, for example, of reptiles and amphibians.

Host school and other groups

Since 2012, students from the T.C. Williams High School International Academy have visited Dyke Marsh in the spring to learn and help control invasive plants.

Every April, FODM partners with the National Park Service and the Raptor Conservancy of Northern Virginia for "Raptor Rapture," to introduce the public to these amazing birds and their needs.

FODMers participate in the annual Alice B. Ferguson Potomac River Trash Cleanup every spring and conduct other cleanups throughout the year.

Community groups like the Girl Scouts help us clean up trash.

The Dyke Marsh Wildlife Preserve, like many Northern Virginia properties, is unfortunately riddled with non-native plants. Areas on both sides of the Dyke Marsh Haul Road, the walking trail, are particularly overwhelmed with invasives, like many areas in northern Virginia. Invasive plants are often found in disturbed areas. The Haul Road, as fill, is a classic example. It was built as a service road by the people who dredged and hauled away half of Dyke Marsh between 1940 and 1973.     Fortunately, the National Park Service (NPS) is trying to better control these plants, but it is truly an uphill battle. Non-natives do not co-evolve with native insects and other animals and usually provide little food value to wildlife. NPS biologist Erik Oberg calls invasive plants like bush honeysuckle “junk food” for birds. Plants like orcelainberry and English ivy can outcompete, destroy and smother native, understory plants.     Porcelainberry vines smother trees, shrubs and plants in summer and fall (see photo, left by G. Booth). NPS staffers, including Erik 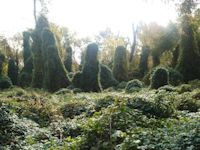